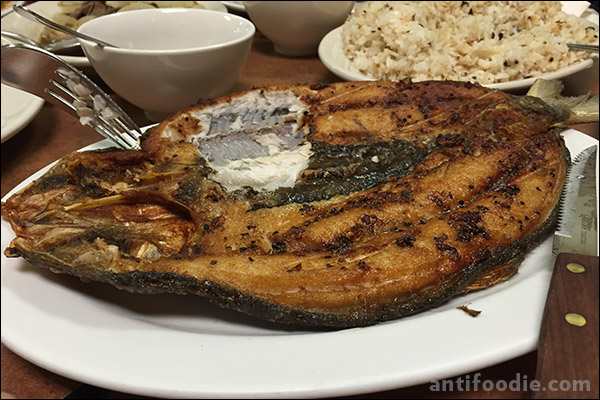 I am not Filipino, but my wife is, therefore by default I have to eat Filipino food on occasion. At first I was definitely skeptical. The first thing you notice about Filipino food is that it’s not always the greatest looking food. There’s not always a lot of colors, some of it is very soupy, and sometimes it just seems plain weird. Not that I should really be one to talk about colors… when it comes to food, the most colorful dish I eat is a hot dog with ketchup (yes, ketchup), mustard, relish and onions… But in the case of Filipino food, it really isn’t that visually appealing. Now obviously looks have absolutely nothing to do with taste as I’ve taste some terrible stuff that only looks good on the plate, so we won’t hold that against them.

Kawayan is traditional Filipino food from the previous owners of Filipiniana Restaurant in Niles. If you’ve ever been to Filipiniana then Kawayan should look pretty similar to you, only smaller. Tucked away in a small strip mall in Jefferson Park, what Kawayan lacks in restaurant decor, they make up for in friendly service and home cooked Filipino food. I’ve been to many Filipino parties over the course of dating/being married to my wife, and the food at Kawayan is exactly what you would get at any of those family gatherings. It’s the definition of home cooked Filipino food; most of which I’ll actually eat.

With that said, lets talk about the food; some of which I loved, some of which I liked, and some of which I just plain wouldn’t try. Keep in mind that we were out with 6 people; 4 adults and 2 children. So I wouldn’t recommend ordering this amount of food with only 2 people as the portions were pretty large, especially the Bistec and the Bangus.

If you want to be sure that I will be well fed at a Filipino restaurant, just make sure you have Lumpia on the menu. Lumpia is a very simple mini fried egg roll that usually has pork and some other stuff in it. Whatever is in it, it’s delicious. I don’t think I’ve ever had bad Lumpia and Kawayan is probably one of the best I’ve ever had. Normally when you get it at family gatherings it’s not super fresh and hot (as it was catered in from somewhere), but having it right out of the fryer, warm and crispy, was definitely a treat. I would go back to Kawayan for the Lumpia alone.

My other go to Filipino dish is Bistec, which is seasoned beef in sort of a soupy broth, with onions. Don’t let the “soupy broth” throw you off, it’s not like a soup, it’s just sitting on a deep plate with a ton of juice in it. I think Bistec is the first Filipino food I ever ate because it seemed the most normal to me. I’ve definitely gotten it at Filipiniana, so I knew there was no way this dish was going to be bad at Kawayan, and I was right. There’s a distinct flavor to Filipino Bistec that I can’t really describe. It’s a bit sweet, but the onions balance that out a little bit; the meat is a little tougher than pot roast meat, but pulls apart in a similar fashion, and the pieces are usually pretty thin and not terribly large. You’ll have to taste it for yourselves.

Next up was the Bangus (pictured above)… and much to my chagrin it’s not pronounced “Bang Us” (although that didn’t stop me from referring to it as that all meal). Properly pronounced “bahn-oos” (I guess), this dish was just a large fried fish on a plate, head and tail and all. You ate it by just digging into the side of it and spooning some on to your plate.

I’ve never been a fan of food that looks back at me, which is part of the reason why I never really eat Lechon (basically a pig roast), but I had to give this fish a try. I don’t really eat a ton of fish, but when I do it’s either fish sticks or white fish, and things Bangus was a white fish… and it was fried. It’s hard to go wrong with a fried white fish so it wasn’t too bad. I probably wouldn’t order it as my own personal meal, but everyone else seemed to enjoy it quite a bit and I still had a few bites here and there.

Aside from the garlic fried rice, which was pretty solid, the last thing we ordered was the Crispy Pata, which is deep fried pig trotters or knuckles. This thing was pretty interesting. It’s a giant deep fried bone, with a bunch of meat on it; I think it might have been pigs feet, but I’m not sure. It obviously doesn’t look like a pig’s foot after it’s been deep fried, it just looks like a bunch of meat on a bone, but I was still a bit hesitant to try it. Once I finally tried it, it wasn’t that bad, it just tastes like deep fried pork. Again, probably not something I would order for a meal, but seemed to be a big hit at the table.

For dessert we ordered the Halo-Halo, which I didn’t even try. For one, sometimes me and ice cream don’t get a long, and two, why would someone put beans and corn in with ice cream? The whole thing just seemed weird to me, but everyone else loved it. The dish is shaved ice topped with sweetened milk, ice cream, sugar palm, sweet beans, coconut sport, cream corn, jackfruit, leche flan, and ube. I don’t even know what half of those things are, but it didn’t sound like something I wanted to try. But again, I was the only one.

Overall, if you’re looking for some great home cooked Filipino food in the Jefferson Park area, I highly recommend checking out Kawayan. I may not have tried everything we ordered, but I’m a super picky eater. Everyone that I was with loved everything about the place, hell, one of them even tried to buy some of the artwork hanging on the wall before we left. 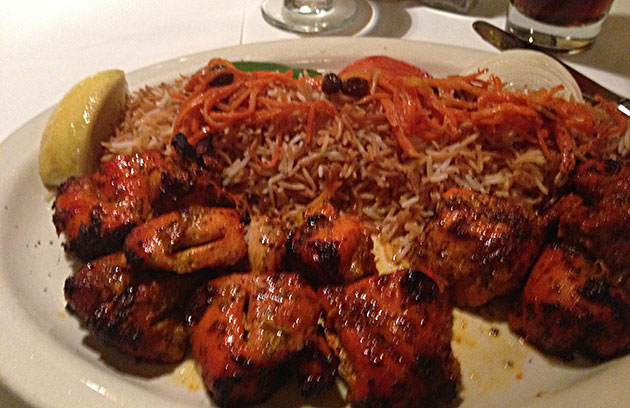