The time has finally come. After waiting for months since the sign first went up in the window, the Ten Mile House restaurant on Central street in Evanston is now officially open for business. And seeing as how we were pretty excited for a new restaurant to open so close to our house, we decided not to wait any longer.

Even though we live just down the street, and have walked further than Ten Mile House to get to BlueStone, we decided to drive this time. It was pretty cold last night, Celeste is pregnant, and my car has remote start… I couldn’t think of any positive reason to walk. There are a bunch of metered parking spots on both sides of Central near the restaurant, but all of them were taken. Thankfully there were some spots just east of the restaurant across from Mustard’s (which I’ve also driven to, even when it’s not cold).

The restaurant itself is very nice. It’s very bright and modern. The tables, bar and floor are all very light hardwood accented by darker, super comfortable, leather chairs. It definitely still has that neighborhood feel, but with a touch of class. You don’t necessarily think you’re at a fancy restaurant in Chicago, but you also don’t feel like you’re on Central street, it feels like it would fit in very well in downtown Evanston, which is why we’re glad there’s a place like this by us. I also noticed that they had like 10 Sonos Play-1 speakers hanging from the ceiling, which seemed like an expensive way to wire a place for speakers, but maybe I’m wrong.

I called ahead of time and made a reservation for 6:30 and I’m glad I did. Celeste walked past it on her way back from the train at like 5:30 and said that it wasn’t that crowded, but I figured it would get more packed between 6-7, and we were definitely right. When we walked in there were a handful of people already waiting for tables, and a bunch of people at the bar waiting for tables to open up. We walked right in, told them we had a reservation and were seated immediately.

Upon being seated we had barely started looking over the menus when our waiter came over to introduce himself. “D”, as in Daniel (I’m pretty sure that was his name), was extremely nice. He seemed a bit flustered with everything going on, but that’s all to be expected with a new restaurant opening, and it was nothing to complain about it. I actually found it kinda refreshing that he was so eager to help us out and answer questions.

One of their selling points is their selection of craft beers, but seeing as how I’m not really a beer drinker I was happy to see a couple ciders on the menu, so I went with the Vandermill Cider, which is one of the better ciders that I’ve had. Celeste didn’t think the baby would want to have any wine so she ordered a pellegrino, but much to her dismay, they didn’t have any; regular water would have to do.

I’ll admit that when I first started to see pictures of the food pop up on Ten Mile House’s Facebook page, I was a little turned off. I’m not a fancy food type of guy and all of the food they were posting pictures of looked super fancy and used ingredients I’d never heard of. But when the menu itself was finally released online I was able to breathe a sigh of relief. There really is something for everyone on this menu.

Their main focus seems to be smoked meats and wood fired pizzas. We opted to stay away from the pizza this time, even though it seemed like everyone in the place was eating it, and instead try out the sandwiches. I actually would have tried the Dry-Rubbed Baby Back Ribs, but they don’t do 1/2 slabs and I wasn’t really in the mood for trying to take down a full slab of ribs, but there’s always next time… and there will be a next time.

Celeste decided to go with the Mile High Club, which consists of smoked chicken, bacon, smoked tomato aioli, white cheddar, lettuce, and tomato on whole grain toast. It was a monster of a sandwich, as you can see from the picture. I didn’t try it as I’m not an aioli person, but without the aioli, this is definitely on my list to try. She ate the whole thing, so I can only imagine she (and the baby) enjoyed it.

In addition to the sandwich she ordered a small cup of Vegan Corn Chowder (smoked tomato salsa) soup, which I did try and thought it was pretty good. I prefer my soup a little saltier and there were a few bites that had a bit of a spicy kick to them, but it was still pretty tasty (and I can always add salt).

As for me, I could have gone a number of directions with the food, but I decided to just dive in and order the one thing that I knew I had to try… the Crispy Grilled Cheese (pictured at top). If I wasn’t in the mood for a full slab of ribs, then it would be impossible for me to pass up a grilled cheese sandwich with bacon on it. And this wasn’t just your normal grilled cheese, this grilled cheese consists of white cheddar, mozzarella, and provolone cheeses, on country bread, which also seemed to have some cheese melted around it, but I could be wrong. You also had the option to add bacon or any of their smoked meats or roasted tomatoes; naturally I opted for bacon.

Normally I don’t ever order these fancy/adult grilled cheese sandwiches at restaurants because I eat like a 5-year old and I like my grilled cheeses normal, with Kraft singles and that’s it. But in this case, I actually do like all of the cheeses on this sandwich, and it was pretty damn good. My only minor complaint, and it would never keep me from ordering it again, is that I wish the bacon were slightly more well done. I prefer crispier bacon as opposed to floppy bacon, but bacon is bacon and it was still delicious.

So overall we were very impressed with everything about Ten Mile House, so much so that I even left more than 20% tip for our server as he was pretty great. He even spent a couple minutes talking to us about how he got the job and a little bit about the owners, super nice guy, I hope he does well over there. We’ll definitely be back to try the ribs, pizza, burger, BLT, and the rumored brunch that it sounds like may start next year, that will be awesome. The only thing that would make me happier is if they did breakfast during the week, although since I work from home I could see that becoming quite expensive for me. 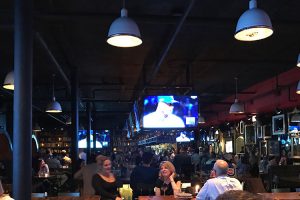 Tacos, Carne Asada and Shrimp From Los Nopales
The Garage Bar Chicago – Probably Not A Good Place For Babies
Comment