Every year (for the past 4 years) we’ve gotten a group of friends together for a nice, overpriced, dinner out at a Chicago steakhouse. In the past we have visited such establishments as Mastro’s, Chicago Cut, and David Burke’s Primehouse; this year we made our way to Del Frisco’s Double Eagle Steakhouse. As I’ve said in the past, I am not a huge steak fan, it doesn’t make my mouth wet with excitement as it does with some other people, but I don’t totally dislike it, I just dislike the thought of paying $40+ for one. That being said, I do look forward to our meal out with everyone each year, as it’s more about the company than it is about the food, although I will say that Del Frisco’s was probably my favorite of the 4 places we have gone so far, so it’s going to be hard to top next year.

Oh, and if you’re looking for pictures of any of the food, you’re not going to find any here. This is meant to be a night spent enjoying the company of friends, so I wasn’t about to pull out my phone and start taking pictures, sorry.

Since there are usually between 10 and 12 of us, that means there’s a lot of food on the table. It’s become somewhat of at tradition for us to order multiple seafood towers for the table, and this year was no different. The Shellfish Plateau, as it’s so eloquently called at Del Frisco’s, consists of Chilled Alaskan King Crab Legs, Iced Jumbo Shrimp, Fresh Oysters on the Half Shell, Chilled Crab Claws, and Traditional Garnishes… there were 2 of these for the table. It’s no secret that I’m not a seafood person, so I did not indulge in any of this. I know, I’m crazy, you don’t have to tell me, everyone at the table told me multiples times. But to be fair, I have tried everything on the tower at least once in my life, so it’s not like some food where I’ve never had it, yet claim I still don’t like it. Seafood and I just aren’t that good of friends.

Since there was quite a bit of food on these seafood towers, we decided to keep the appetizers light. Last year I think we ordered pretty much every appetizer on the menu at David Burke’s, but this year we decided to just cut it down to one appetizer and instead go crazy on the sides. Our one appetizer of choice, which also happened to be seafood, but one seafood I will eat, was the Shanghai-Style Fried Calamari, which is fried calamari in a sweet chili glaze, bean sprouts, cherry peppers, crushed peanuts, and scallions… this was absolutely delicious. I’m a fan of fried calamari, but the sweet chili glaze on these were outstanding. It almost tasted like orange chicken, but with a bit of a kick at the end. Either way, this was a great choice, and we destroyed both plates of it.

For our entrees, pretty much everyone got some sort of steak, except for Celeste who ended up with lobster tail and a crab cake. That’s not entirely what she wanted, but each time she ordered something the waiter would come back to inform her that they had just sold the last one of what she wanted. It all worked out in the end though as she’s pretty sure if she had gotten what she originally wanted it would have been way too much food.

As for me, I went with the 12 oz. filet, which is pretty much what I get each year. Actually, I usually stick with the smaller portion, but for some reason I was feeling the 12 oz. instead of the 8 oz. It was probably a dumb decision since I didn’t finish it all, but it was still pretty good. I ordered it medium and it was probably a little closer to the medium rare side, but I tend to trust these nicer steakhouses and I just let it ride. It was a pretty damn good steak. As I said, I’m not a huge steak person, but I thought it was better than some of the other ones we’ve had. Was it worth the money, absolutely not, I don’t know that any steak is worth almost $50, but it was definitely tasty.

For our sides, everything is family style, so we just went crazy. I believe we ordered 2 of each of the following items (enough for everyone at the table): Maque Choux Corn, Sauteed Mushrooms, Chateau Potatoes, Lobster Mac & Cheese, and Brussels Sprouts. I did not try any of the mushrooms or the brussels sprouts, but the consensus at the table was that they were pretty good. The brussels sprouts were shredded and cooked in bacon fat and then had more bacon added to them in the end, so I imagine they were decent, I just can’t stomach brussels sprouts in general, no matter how much bacon you put in them. The Maque Choux Corn was like a creamed corn with some other stuff in it, not entirely sure what else, but it was also quite delicious. But as far as the sides went, it’s really hard to top the Lobster Mac & Cheese, but the Chateau Potatoes were actually pretty solid. If you get a chance to go to Del Frisco’s I would highly recommend making sure you try the Lobster Mac & Cheese, even if you’re not a big lobster person.

Overall Del Frisco’s sits at the top of the list of places we’ve gone so far. I’m still not a huge fan of spending an insane amount of money for a meal, but the company and memories are well worth the money. I hope this is a tradition we continue for years to come.

Sushi With A Side of Weed – Kyoto Sushi, Lincoln Park Chicago 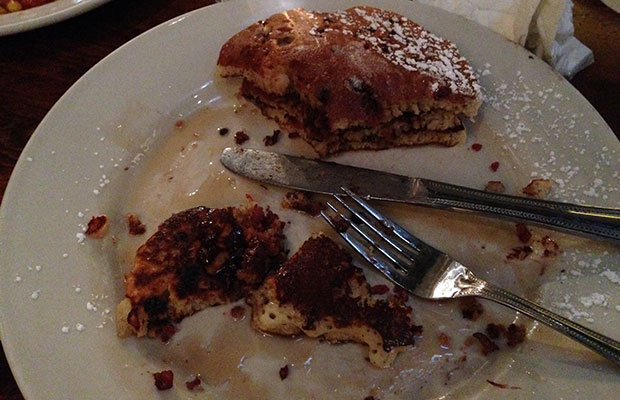