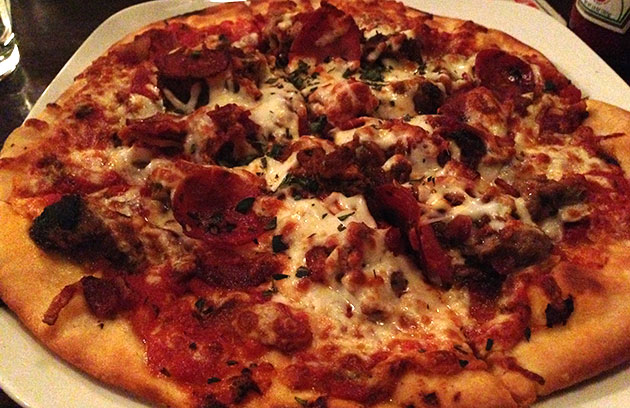 I should just rename this site “I hate all food except for Pizza” since it seems like all I ever eat is pizza whenever we go to any restaurant. I eat pizza at least twice a week, on a slow week. I’m pretty sure I ate pizza 4 or 5 nights last week alone, not to mention the leftovers for lunch a few days. If you would ask me what my favorite food as a 31 year old is, I would absolutely say pizza. But the funny thing is, as a kid I would have told you hot dogs. Clearly I have an amazing pallet, but it’s a true story that I refused to eat pizza until I was probably 12 years old. Seriously, what kid in his right mind doesn’t like pizza… Apparently my anti foodie traits were revealing themselves at a young age, but thankfully I was forced to try pizza one night and have yet to look back.

Last week I met my wife and a few of her co-workers at Revolution Brewing Brewpub, in Chicago’s Logan Square neighborhood, for happy hour. I’m not a huge beer drinker, but the food is pretty solid. We’ve been to Revolution before and I believe I had a burger after we devoured our bacon fat popcorn appetizer, but this time we opted to go a little different.

As an appetizer we ordered the Soft Pretzel, which was exactly what you expect… a large soft pretzel. What makes it different though is the beer cheese sauce they give you with it. I love cheese, but I’m not a huge beer drinker, and mixing the two together just sounded kind of gross to me but I gave it a try anyways. It didn’t really do anything for me honestly. I would have rather had just straight cheese to dip it in if I was going to dip in anything, but everyone else seemed to really enjoy it. I was also informed that if you order a certain side of soup (which I can’t think of the name right now), it’s literally just a bowl of the beer cheese that you eat with a spoon. That sounds awful to me. And this coming from the guy that can eat an entire tub of Merkt’s cheddar cheese in a day… gross, but delicious.

With the appetizers done it was time to start on our actual meals. Three of us ordered pizzas and the other two ordered burgers. I chose to go with the Smoke Stack Pizza as it seemed the most “normal” while still being a bit on the adventurous side. The Smoke Stack Pizza consists of pulled pork, bacon, italian sausage, pepperoni, smoked tomato sauce and oregano; it was delicious. There was so much meat on this thing I couldn’t even pick up a slice without it toppling over, leaving me with no choice but to eat the meat with a fork. If you’re looking for a smaller (in diameter) pizza that will last you more than one meal, then this is a great choice. I was only able to stomach 2 of the 4 pieces before I had to wave the white flag. The rest was devoured for lunch at work the following day and still tasted just as good as it did the night before.

So if you’re looking for a solid place to grab a beer and some food for happy hour, or any hour, give Revolution Brewing Beerpub in Logan Square a try. Be warned though, you may slip into a meat coma if you attempt to eat the entire Smoke Stake Pizza on your own… That should be one of those ridiculous food challenges you see on TV. G26SQ97AYVWM