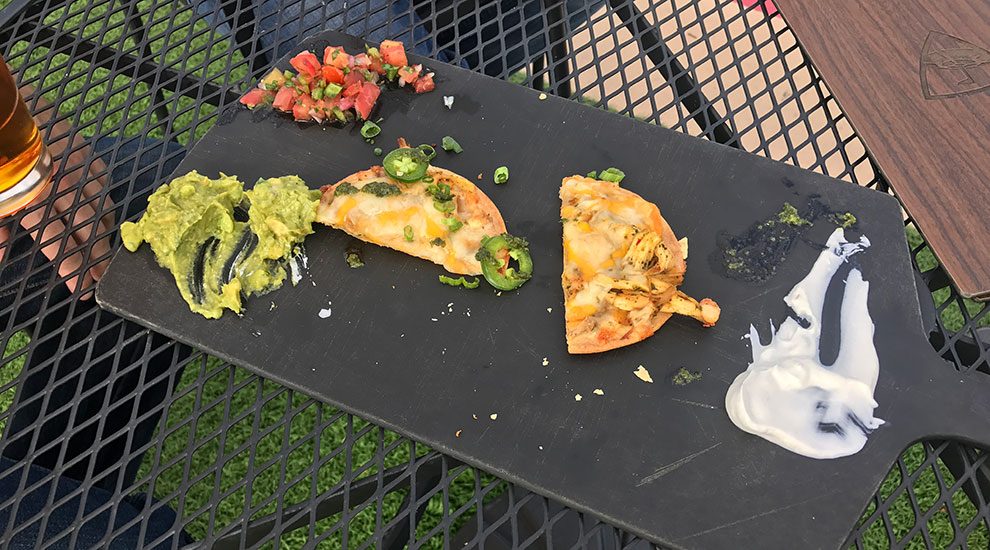 When I see nachos on the menu somewhere I assume that I’m going to get a giant heaping pile of nacho chips, slathered in cheese, of either the melted or sauce variety, topped with a meat of some sort, tomatoes, jalepenos, black olives, sour cream, guacamole, and whatever else one might find on piled high atop mount nacheesmo.

A cutting board with 6 chips, each of which has some melted cheese on it, some meat, and a single jalapeno (maybe 2), served along side a small pile of tomato salsa, a dab of sour cream, and a clump of guacamole… that is not nachos by my definition. But that’s exactly what we got when we went to Top Golf on Saturday afternoon.

After finally getting to our bay at Top Golf on Saturday, we were starting to get a little hungry. Not hungry enough to order a full meal, especially since we were going to grab some BBQ at Sweet Baby Ray’s Barbecue Restaurant afterwards, but hungry enough to munch on a pile of nachos.

As you know from the intro paragraph above, we were not brought a giant pile of nachos as we expected, but instead we were given 6 individually crafted chips with cheese and meat on them, which we were then responsible for adding other toppings to if we so desired. How anyone thinks that 6 “nachos” of this variety are worth $10 is beyond me. Don’t get me wrong, they tasted good, but when you’re not expecting it, it’s a little jarring and annoying. Had we known that we were only going to get 6 chips, we probably would have ordered something else, because this did not help tied us over until dinner.

When we brought up our confusion to our server, she told us that we weren’t the first people to complain about getting something they weren’t expecting, which is why they put a picture of the nachos in the menu book. Ok, our bad for not noticing the weird nacho picture above the appetizer section and knowing that those were the nachos we were getting… and yes, I know it says “Signature Nachos” in the bottom corner of the image, but it didn’t catch our eye.

I also think that if we weren’t the first people to complain about being slightly mislead by the nachos description, then they should probably have their servers explain to people what they are getting, or just change their damn “nachos” to a plate of real nachos.

I’m sorry, but if I’m at Top Golf, drinking beer and hitting golf balls all afternoon, I’m not really looking for a fancy artisanal menu, but maybe it’s just me and my unsophisticated palate.