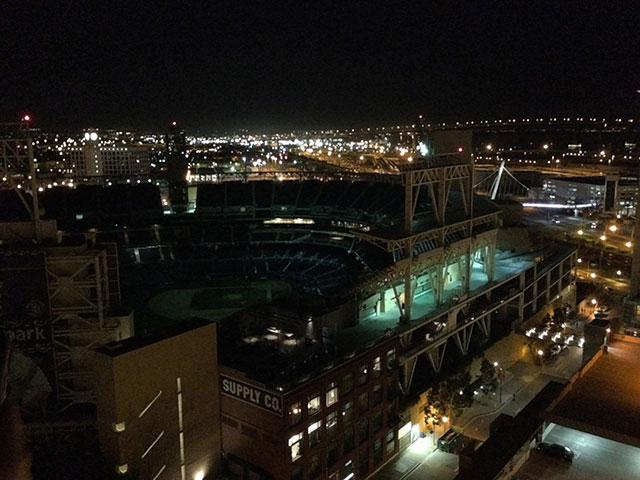 After passing out early Friday night (Day 1), Celeste and Liza decided to get up early and go for a run, while I just laid around the hotel room doing absolutely nothing. We didn’t have any plans until Celeste’s cousin, whom she hasn’t seen in ~15 years, was coming to pick us up to go to brunch at 11am. Unfortunately for this blog post, I didn’t take too many pictures on day 2. I hate taking pictures of my food, even for the sake of the blog, so I apologize.

We aren’t super familiar with the area outside of downtown San Diego, so we were excited when we were told we were going to eat brunch oceanside in La Jolla. We’ve been to La Jolla before, but just to see sea lions, we didn’t really eat anywhere. Unfortunately for us, we weren’t the only ones with the same idea. The restaurant they were going to take us to was crowded so we decided to head out to Del Mar to check out a place called “Snooze“.

Snooze had a wait of about an hour for a group of 6, but at this point we were just hungry, and everywhere else was going to be about the same so we stuck it out. It took about 45 minutes, but we were eventually seated. The restaurant itself is pretty nice, there’s a nice big open patio outside, but of course we were jammed in the back corner. The restaurant was pretty busy, so to make up for the longer wait for our food, the waitress brought out a cinnamon roll pancake which was the most delicious pancake I’ve ever tasted. Basically just a pancake with cinnamon roll frosting, pecans, some sort of cinnamon drizzle and cinnamon butter. It was amazing. You know what else is amazing, lemonade mimosas, which I’ve never had. Celeste, Liza and I were the only ones that drank, while Celeste’s aunt, cousin and cousin’s fiancee just watched us. Also, Liza won the drinking contest… again.

As for the food at Snooze, I was satisfied, yet a little disappointed at the same time. The pancake was amazing, so I’m glad they gave us that, but I got a 3 egg scramble with cheddar cheese and bacon and as amazing as it sounds, I did have a problem with it. I got to choose 3 fillings for the scramble, I chose bacon and cheddar cheese, no third, but the waitress said she’d just do a double order of bacon instead of the 3rd. And as delicious as that sounds, it was all bacon. I basically ate a whole package of bacon, slightly held together by a few eggs and a little cheese. Don’t get me wrong, I love bacon, but this was just a bit overkill. Liza got an omelet which she enjoyed and Celeste got the Snooze Spuds Deluxe, which is basically just eggs on top of a bunch of hash browns and whatever fillers you want.

After breakfast at Snooze, we made our way into the Gaslamp district of San Diego and stopped by the Horton Plaza Mall… ugh. I hate shopping and was hoping Celeste would wait until I left to do it, but she really wanted to check a store to see if they had this jacket she wanted. They did, and we were in and out in 15 minutes… then it was time to continue the drinking.

We wanted somewhere in Gaslamp where we could sit outside and enjoy the weather. Those were our only criteria, but when you find somewhere with outdoor seating and college gameday specials, you can’t go wrong. We ended up at the Gaslamp Tavern and found a table out on the small sidewalk patio. Celeste ordered a beer, I ordered a captain and coke (I needed some sugar) and Liza ordered an entire pitcher of bud light! Ok, that’s not fair, she didn’t drink it all herself, I helped her out after getting my sugar fix, plus the waitress isn’t allowed to serve an entire pitcher to a single person. We only stayed here for one drink before heading back to the hotel where we were going to watch the Bulls/Pacers preseason opener. Even in San Diego you can’t miss the return of Derrick Rose.

Our hotel (The Manchester Grand Hyatt) has a pretty nice sports bar in the lobby so we sat down there to watch the game and have a few more drinks before dinner. Coincidentally the bartender grew up in the town Celeste and I live in back near Chicago, so that was worth a free round of drinks. We stuck around until half time and then made our way back to the Gaslamp district for our big dinner at Searsucker.

Out of all the places we ate on the trip, this is the place I was least looking forward to. I know it’s probably the nicest restaurant we went to and more upscale food, but that’s the whole point of this blog… I don’t like that kind of food. I don’t really care to sit down and eat a steak, I find no real enjoyment out of it, hence why I don’t like going to expensive steak restaurants. But Celeste and Liza were excited about it, and Liza’s friend Larry met us out so I had no choice.

There was literally nothing on the menu that appealed to me. Things like marrow bone + sea salt + onion jam and farm bird lollipops + snake oil + bleu fondue… We didn’t end up getting those things, but just to give you an idea of the menu. I think we ended up with duck fat fries, which were ok, but I don’t see the appeal of “duck fat”, short ribs, and maybe fried brussels sprouts. I tried the fries and that was about it. Celeste and I split the filet, which is about the only entree I could really see myself eating. It wasn’t terrible, but I asked for it cooked medium and it was definitely medium rare. Not the biggest deal in the world, but I would have liked it a little more cooked. Larry got the egg + pork belly and Liza got a caesar salad. Everyone seemed to enjoy there food, but like I said, this isn’t my kind of place. I did try the short ribs and it just tasted like pot roast to me, I could have made it at home in the slow cooker.

After dinner Larry took us up to the top of the Marriott to the Altitude Sky Lounge for a couple drinks, thanks Larry. The view from up there is pretty cool, it overlooks Petco Park, it probably would have been nicer if it looked out the other way, but I can’t complain about anything in San Diego.

So that was day 2. Lots more eating and drinking and lots more walking. Of all the places we went on Day 2, I enjoyed Snooze the most. It’s more my kind of food as opposed to Searsucker, but I’m sure the others will tell you different. Day 3 consisted of a Chicago Bears bar, the Pacific Beach boardwalk, more mexican food and more drinking. 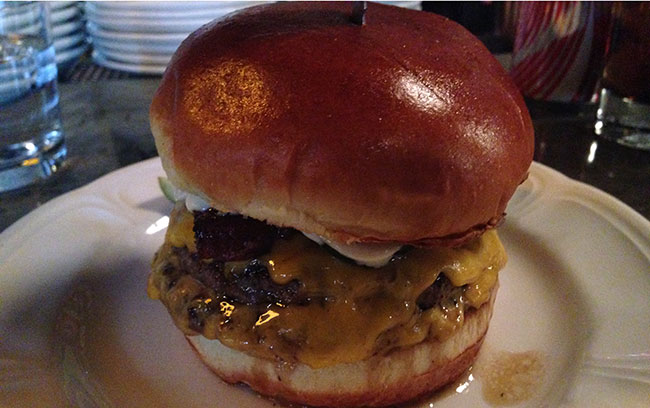 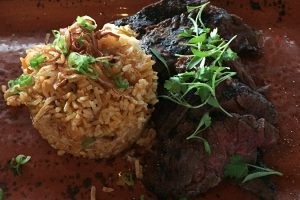 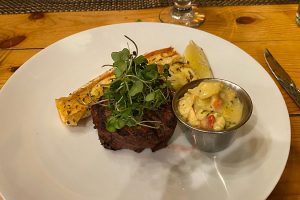