Every time I visit San Diego I never want to leave, and this time was no different. Celeste was scheduled to attend a conference at the Manchester Grand Hyatt hotel in San Diego on Monday through Wednesday and knowing that we were trying to go somewhere for a weekend, we decided to both fly out on Friday morning. I came home early Monday, while she stayed a few more days for the conference. On top of that, Liza flew out from Vegas and hung out with us for the weekend until she left Sunday night. I don’t remember the last time I went to that many restaurants and/or bars and drank that much in one weekend. There was also some food, which I do remember…

When Celeste and I first arrived on Friday it was 10:30 in the morning, San Diego time, so we had some time to kill before Liza arrived at 3:30. Seeing as how we hadn’t eaten lunch yet, and 10:30 in San Diego is 12:30 in Chicago, we decided to walk over to Little Italy and see what we could find for food. We passed this little mexican place that I remember Guerric taking Pat and I to the last time we were out there doing our baseball trip, but we were doing Mexican food for dinner that night so we decided to just continue our pilgrimage to Little Italy.

Little Italy wasn’t too far of a walk from our hotel, but I’m not sure we realized that choosing a restaurant was going to be so difficult. We ended up at Trattoria Fantastica, which seemed to be quite popular, even so early in the morning. We were on vacation so naturally it was time to start drinking. With mimosas ordered we got the calamari appetizer which was a little underwhelming to me. I usually like fried calamari, but this seemed just a bit chewy to me, and I’m not sure that it was “fresh”, seemed like it could have been frozen, but I’m the last person that would know if something was fresh or not. Maybe it was just a bit under/over cooked that made it chewy. For entrees we ordered a Margherita pizza as well as the Tritata salad. Of course I didn’t eat the salad, but the margherita pizza was delicious. And I liked how they didn’t put the cooked tomato right on top. I prefer my tomatoes cold and uncooked, hence the reason why I very much dislike Lou Malnati’s pizza.

With lunch over with we decided to walk down the ocean front and check out the cruise ships and the aircraft carrier (U.S.S. Midway museum). We didn’t do the U.S.S. Midway museum tour since we’d done it before, but we did check out the large statue of the sailor and woman kissing, along with the Bob Hope memorial. Our way back to the hotel took us through Seaport Village which is a very nice little area, right behind out hotel, with shops and little restaurants. Upstart Crow Bookstore & Coffeehouse sounded like a perfect place to sit and relax while Celeste got some work for the conference done and we waited for Liza. They were also the only place out there with free wifi.

Once Liza arrived we made our way back to Seaport Village to find a happy hour spot. We ended up at Asaggio Pizza Pasta Plus which is right on the water, had Chicago stuff all over it, and was offering up $6 32 oz beers, which you can’t beat. We each got a beer and sat in awe as Liza finished hers before Celeste and I were even half way done. To her defense, she was drinking bud light and Celeste and I were drinking shock top. Not that shock top is a heavy beer, but lets be honest, water is heavier than bud light. We didn’t eat here due to the fact that we were heading out to grab Mexican food shortly, but it didn’t really seem like a place that you would go for dinner, more just a place to grab lunch while walking along the water.

Taking a cab in San Diego is very convenient from the hotels, but very expensive and very inconvenient if you are out of the downtown area. We cabbed it over to Lucha Libre to grab some tacos and carne asada fries for dinner, but just to go 2.8 miles cost $16!! That’s absolutely insane, but we’ll get back to that in a minute. Lucha Libre has been featured on a number of different TV shows over the years, so we decided to give it a try. I know there are much better Mexican places in San Diego, but it was a recommendation from a friend.

I had the carne asada tacos, my go-to and honestly I can’t remember what Liza and Celeste had in terms of tacos, but I know they split an order of carne asada fries, that I’m still perplexed as to how they finished them. I have to admit, the food was pretty solid, much better than chipotle in terms of meat tenderness. I like when I don’t have to spit out half of my food into a napkin because it’s un-chewable. I think we all agreed that it was definitely solid food, but there’s better mexican to be had in San Diego.

Once dinner was over it was time to find a cab back in to downtown, which proved to be quite a pain in the ass. Our initial cab driver gave us his card and told us to give him a call and he’d come pick us up when we were done, but with the cab costing $16 and Liza only tipping the guy like 40 cents, we figured it was best to go another route. Thank you uberX, you are a life saver and a money saver. I called an uberX driver who came and picked us up in about 5 minutes, took a faster way back to the hotel, all the while costing about half as much as the cab. Needless to say we should have done this Sunday for the bears game, but we’ll get there in another post.

That was the end of my first night in San Diego. Once we got back to the hotel room I passed out. Celeste and Liza wandered up to the 40th floor of our hotel to check out the “Top of the Hyatt” bar/restaurant area, which is kind of like the Signature Room in Chicago. Day 2, which continues in another post, consisted of a delicious breakfast, a disgruntled trip to the mall, along with more food and alcohol.

This isn’t the last time we’ll visit San Diego, so feel free to leave other restaurant recommendations in the comments so we can give them a shot next time we’re in town.

And here are just a couple other random photos from day 1. 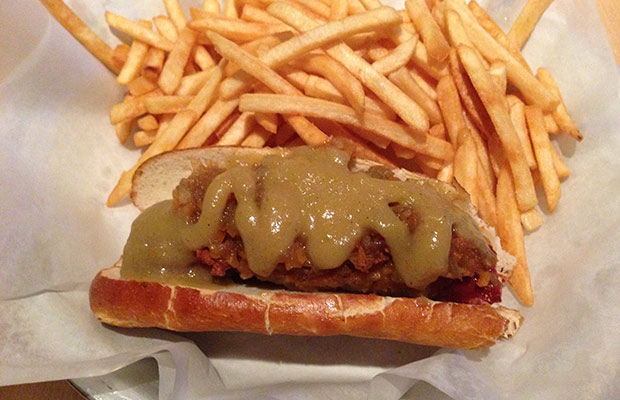 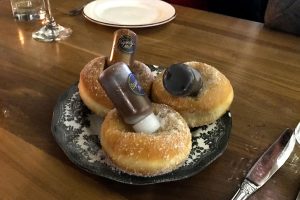