Which do you think tastes better, pop (soda) in a plastic bottle, in a can or from a fountain? I can tell you right now it sure as hell isn’t the plastic bottle. Unless it’s 90 degrees outside and I’ve just run a marathon (which will never happen), I really despise having to drink a 20 ounce pop out of a plastic bottle. I would much rather drink from a can when given the choice. Even though the pop manufacturers have come out and said that it’s the exact same formula that goes into bottles and cans, there’s no way they can seriously think they taste the same.

Plastic bottles much leak some sort of toxic chemicals into the drink that alters the overall flavoring of the pop itself. Or maybe it’s the fact that light can get in through the clear plastic and taint the liquid… I don’t know, I’m not a scientist. If I were a scientist, I would spend all of my time trying solve this tastebud threatening issue. Cancer can wait, I need a plastic bottle of pop that doesn’t taste like sugary bong water. Pop that comes in a can, unless it also contains a dead mouse, tastes so much better it’s not even a comparison. I don’t even like to buy 2-liter bottles of pop when we have parties, just for the sheer fact that I feel like my alcohol is missing out on all the goodness that comes in the cans. Plus, with cans, I feel like I’m doing my part to help preserve the world… you know, by recycling more aluminum. I mean come on, anyone can recycle one plastic bottle, but 24 aluminum cans will feed way more starving children… That’s how recycling works right? Again, I’m not a scientist… amateur magician maybe, but not scientist.

So that just leaves fountain pop, in particular McDonald’s fountain pop. Fountain pop isn’t the same as bottled or canned in that each machine can be calibrated in different ways so they don’t always taste the same from place to place. The amount of carbonated water vs syrup in each machine can vary, but one place that has gotten this mixture down to a science is McDonald’s. Even though I’m a Pepsi guy, as opposed to Coke, I would drink a McDonald’s coke over a Pepsi (of any sort) any day of the week. There’s just something about it that makes it so delicious. I’m not sure if it’s the syrup/water mixture or maybe their ice machines are never cleaned and it just gives you that nice moldy taste that other places just can’t replicate. Whatever it is, it’s amazing, and I think if I did a blind taste test of plastic bottles vs cans vs mcdonalds fountain pop, I would pick the fountain one every time… And that’s exactly what we’re going to do. Whenever we have our next gathering I’m going to bring a can of Coke, a bottle of Coke and a Fountain Coke from McDonalds and we’re going pour them all into glasses and do a blind taste test. We’ve actually done this with different brands/types of pop before, all of which were canned, and you’d be surprised how many people mixed up clear colored pops and dark colored colas… Someone even mixed up Sierra Mist and Pepsi. It’s amazing what branding can do to make you think something tastes better. 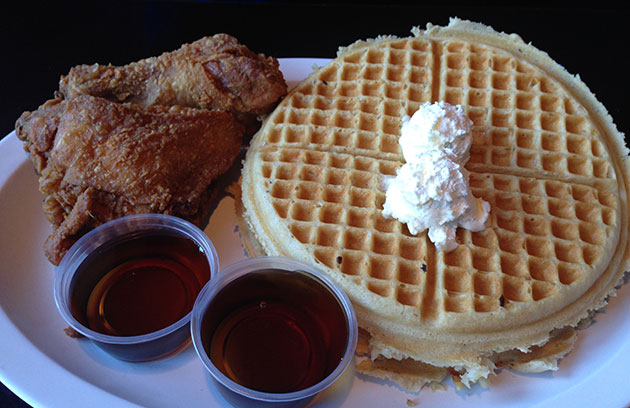 Cantina Laredo with a Side of Chicken and Waffles