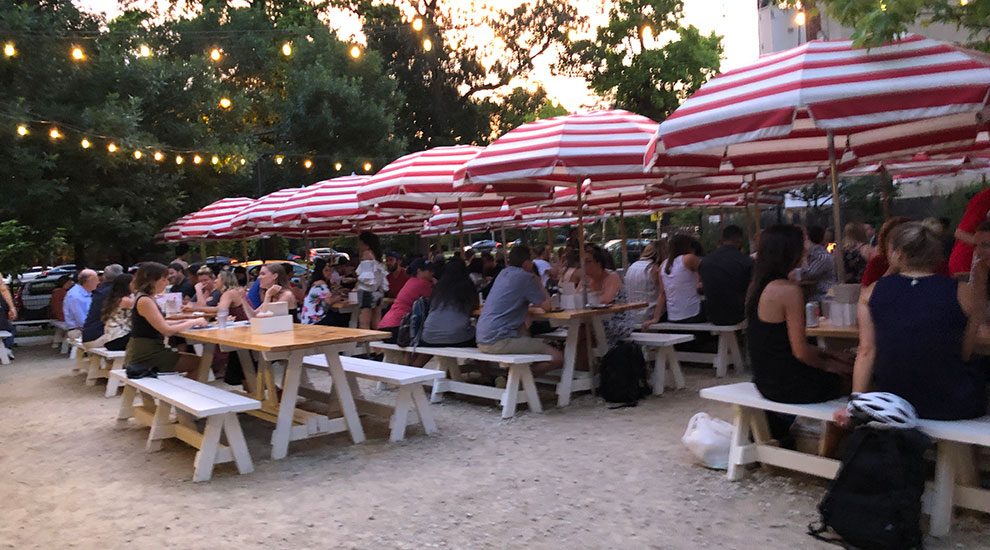 So here’s the thing, usually after I go to a restaurant and really enjoy it, I come home and read the Yelp reviews before sitting down to write my own review on this site. And after last night at Parson’s Chicken & Fish in Logan Square, I was sure I would find a ton of reviews that mimicked the experience I had… but I was surprised to find a lot of the opposite.

First off, I loved [almost] everything about Parson’s, and I’ll get to the few things I didn’t like in a second, but none of those things were the negatives I was reading about on Yelp this morning.

First off, I would say, to get the best experience out of Parson’s, you need to sit outside on their patio on a warm day/night. The only downside to that, is that the wait times for the patio can be long. We had a party of 8 and were told an hour and a half wait. In our case, it was fine, because we wanted to sit on the patio, but that could definitely be a turn off for a lot of people. Keep in mind, it was like 85 degrees outside, on a beautiful Thursday night in Chicago. People like to take advantage of that and sit outside, so we were expecting a wait, as should most normal people looking for that experience. Yes, an hour and a half is quite a long time to wait for a table, but after determining that we really only needed 6 spots at a table for those that wanted to eat, we were probably sat in less than an hour total.

Oh, and sorry for the shitty photos, I hate taking pictures of food in restaurants, and when it’s dark, this is what you end up with… oh well.

Seriously, the patio is what sets this place apart. There are some good beer gardens and patio seating throughout the city, of course, but I loved the fact that when I walked into the back patio at Parson’s, I felt like I was in Austin, TX. It just had that laid back, Austin vibe to it that you’d find down on Rainey Street. It helped that it was pretty hot out last night, so hot I should have brought my Yeti koozie to keep the beer cold.

There’s a huge wrap around bar with chairs along one side and, at the time we were there, a walk up counter on the other. We never had to wait to get a drink at the bar and if you’re in to frozen drinks, that is their speciality. Prices for the drinks are what you would expect from a city bar, so no surprises there, but the one thing that didn’t make it feel like Austin, and one of the things I mentioned above that I was disappointed in, was the fact that they did not have Tito’s Vodka. In fact, they didn’t have a lot of the larger named brand liquors that you find at most bars like Captain Morgan, for example.

That wasn’t the end of the world though, whatever vodka they did have was just fine in my drink, so while it was a little annoying, because I know what I like, the drink was fine in the end.

In addition to the bar, there are quite a few long picnic tables to eat and drink at. These tables are part of the dining area so you have to put your name down and wait for a table to be cleared, you can’t just sit down, but there are quite a few tables. I’m sure on the weekends, when people are hanging out and drinking for a while, those tables don’t turn over very fast, but we managed to get our table in under an hour for our larger group.

The patio also has a ping-pong table that is free to use whenever it is available, which we took advantage of while waiting to be seated. And the other cool thing about the patio is that it’s dog friendly, so feel free to bring your pooch to hang out.

All-in-all I absolutely loved the patio. Everything about the space is awesome and, as I mentioned, reminded me of Austin, TX. In fact, there was even a dude sitting a couple tables over that looked exactly like my brother, who lives in Austin, so it made the experience feel that much more like a Rainey Street bar.

The Food – Chicken & Waffles (and Fish)

When we first arrived at Parson’s it was about 8:15pm, we kinda dragged our feet leaving our friends place, so we got to the restaurant later than we had originally planned. That, coupled with being told it would be an hour and a half wait for a table, made me think I was going to just have to pick up McDonald’s on the way home, instead of getting to try the chicken. Thankfully we were seated in less time than we were told, and the food actually came out extremely quick.

Now I don’t know if the food came out that quick because it was just sitting under warmers in the back, or just because it was already pretty late and not that many people were ordering food anymore. They did do last call for food shortly after we got ours, so I’m guessing it was the latter cause everything came out hot as if it was just cooked.

That was one of the things I saw people on Yelp complaining about, that the food came out too quickly so they didn’t think it was cooked to order. If it wasn’t, whatever, it still tasted good.

Speaking of tasting good, I had been eyeing the menu during the day to try and figure out what to get, and no matter what I looked at, I kept being dragged back to the Chicken and Waffles. I knew it was going to be late when we ate, so I wasn’t sure if it’d be weird to order that, but I honestly didn’t know the next time I’d be down there to try it, so I went for it.

The chicken and waffles comes with just that, chicken and waffles, as well as a sunny-side up fried egg on top. As soon as the plate was set in front of me I immediately started digging in to the waffle. The waffle seemed a little overcooked, but it was still pretty damn good. The egg was also good, but it’s pretty hard to mess up an egg. However, the real shining star of this dish was the chicken.

I’m not sure if the chicken was the spicy chicken or their regular chicken, it did have a little kick to it, but nothing that made me breathe fire. Either way though, the chicken was outstanding. The breading and seasoning was absolutely delicious and crunchy, and the chicken meat itself was moist and juicy. My only complaint about the chicken was that there seemed to be a lot of breading on it, when compared to the amount of meat. And also, there wasn’t enough of it. After my first bite I didn’t want the chicken to end, so no matter what amount they might have put on the plate, I probably would have said the same thing.

I’m also regretting my decision to trade a hunk of the chicken for a piece of a friend’s fish… but that’s just because I wanted more chicken.

The other members of our party mostly ordered the fish, so I did get a chance to try it. Two people got the 3 piece fish fry and one got the fish sandwich, which is Beer-Battered Fish, Slaw, American Cheese, Hot Sauce, Aioli, North Star Pickles.

I’m pretty sure the fish was cod, and I did take a bite of one of the fish fry orders and it was pretty good. I would say that the cod I tried at Crabby Bill’s down in Florida last week was definitely better, but the breading on the fish at Parson’s was delicious, and the fish itself tasted pretty good too. And you know it’s gotta be decent fish if I’m saying it was decent… since I despise most seafood.

The patio at Parson’s Chicken and Fish is incredible, definitely sit outside if you can, but be prepared to wait a while for a table. As for the food, I thought it was outstanding, and I believe everyone else at the table thought so too. I had read a lot of Yelp reviews, and even got a text from a friend, saying that the chicken was bland and didn’t have any flavor, but I don’t know if I had the same chicken as them because I thought it was awesome, super flavorful, and the people at our table that tried mine thought so too.

The service was good, for the most part. I could see why people complained a bit about the slow service, but we didn’t have any issues with our server. The one annoying thing is that they won’t split checks, so I had to venmo some money to a buddy to cover my chicken and waffles since I left before everyone. But other than that, the service was totally fine.

So as with anything, take other people’s reviews with a grain of salt and try the food for yourself. There are way more good reviews of Parson’s on Yelp than bad ones, and a lot of them trying to compare the chicken to Honey Butter Fried Chicken, which I have never had, but please form your own opinion.

After our visit last night, I would absolutely recommend checking it out, and I would absolutely recommend waiting for a seat on the patio on a nice day. Is the food itself worth waiting 1.5 – 2 hours? I’ll let you decide on that one. It’s definitely good, but I don’t like waiting for 2 hours for anything, let alone food, so you’ll have to decide if it’s worth a super long wait.

Have you had Parson’s? How did it compare to other fried chicken places in Chicago? Do you have a recommendation for a better one I should try? Leave a comment below and let me know. 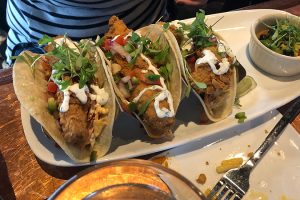 City Works Schaumburg for Some Burgers and Cheese Curds