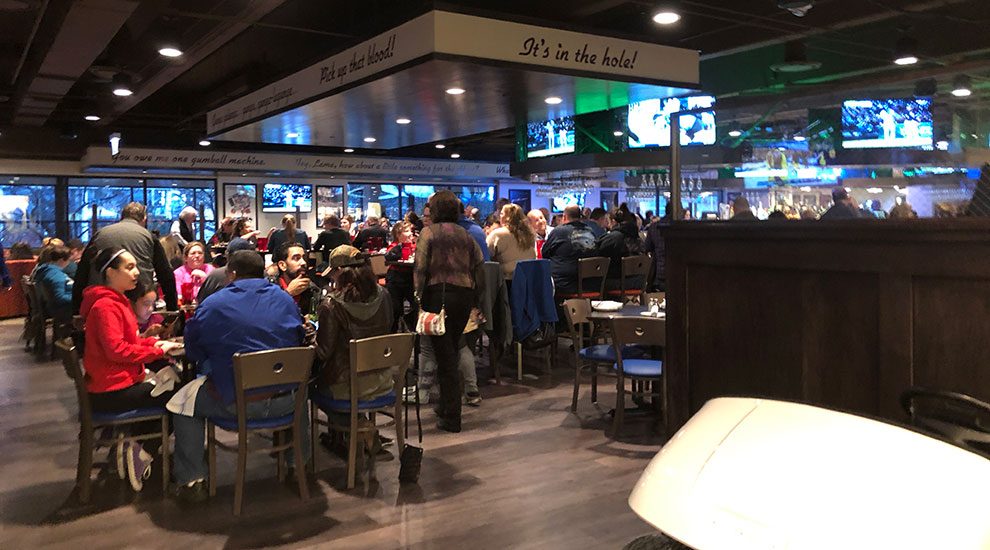 Bill Murray and his brothers decided to open up a second location of their Murray Bros. Caddyshack Restaurant in Rosemont, IL this past week, and they are immediately fighting an uphill battle.

And it’s not because of the quality of the food, or the look and feel of the restaurant/bar itself, but rather the parking situation, and to a lesser extent, the bathrooms… which we’ll get into further down, but the parking situation is so bad I would feel awful if I didn’t warn people about what to expect.

But we’ll get into that in a minute, lets start with a review of the restaurant space itself, as well as the food and the service… since those are the most important aspects of any restaurant.

The question mark on that title is definitely on purpose.

If you wouldn’t have told me anything about this restaurant, I would have never guess it was supposed to be “Caddyshack” themed. The decor and the layout seem more like a generic sports bar than anything else. Sure, there are posters on the wall of movies that Bill Murray has been in, there are cubs jersey’s with the Murray name on the back, a golf cart sticking out of one of the walls, and a small gift shop where you can buy Murray Bros. merchandise… but nothing about the restaurant or the space screams “Caddyshack“.

And that’s not to say that the space is bad, because it’s not, it’s just not what I was expecting when I heard it was a Caddyshack themed restaurant. I was at least hoping for some original memorabilia and props from the movie. Maybe some behind the scenes pictures or a cool stuffed gopher that pops up somewhere… something, anything, that would make it stand out as a theme restaurant. But instead, it’s just your typical hotel sports bar, which is fine, if that’s what you are expecting.

The restaurant features a huge bar in the very center which is flanked by a dozen or so hi-top tables, and then booths that line the outer walls of the space. There are a ton of TVs above the bar as well as around the restaurant which make it a perfect place to watch a game.

We went last Friday night, which was just a couple days after the grand opening on Tuesday, and expected to find the place packed… but it wasn’t. We got there after work around 5 and were able to snag a hi-top next to the bar (which are not seat yourself tables, only the actual bar is). There were 4 of us for most of the night and a 5th joined us later as we were kind of wrapping things up.

The place never got super crowded and there were only a couple groups of people standing around the edge of the bar rather than sitting at a table. But I never felt like it was overly crowded to the point where you couldn’t move.

The Food and Drinks

We didn’t go crazy with the drinks. I had a few Tito’s and Sodas, there were a few Old Fashioned’s and then a bunch of beers, so nothing overly crazy with the drinks. I do think that the mixed drinks are a little expensive considering it’s Rosemont and not downtown Chicago, but I can do $9 Tito’s and Soda every once in a while and be ok with it. I think the Old Fashioned’s were $12 each as well, which I’m not sure is expensive for that cocktail or not as I never drink them… It just still seems like city prices to me.

As we were sipping our drinks, waiting for our fourth, our server came up to us and mentioned that she was going to hook us up with “free golf balls”, as she put it. They were apparently doing an email promotion that people were taking advantage of, but our server was just going to hook us up.

Now I don’t know if there really was an email promotion, or if they were just giving everyone free golf balls, but we weren’t going to say no.

A few minutes later a food runner came up to our table with a plate of food, but we declined it as we hadn’t ordered any food…. unbeknownst to us though, those were our “golf balls”.

We thought she meant literal golf balls, since this was a Caddyshack restaurant after all. But no, it was not a sleeve of promotional golf balls, it was an order of Crispy Potato Golf Balls which are lightly fried garlic mashed potatoes loaded with cheddar cheese and bacon served with signature horseradish dipping sauce.

I thought they were delicious. I’m not really supposed to eat garlic, but cheesy mashed potatoes with bacon in them are hard for me to pass up. So if you’re looking for an appetizer, I would definitely give the Golf Balls a try.

As for the rest of our meals, I went with the BBQ Pulled Pork Sandwich, one of us got the Chicago Hot Dog, and I believe one of us got a cheeseburger, and the last meal is escaping me (and it’s not on their online menu).

I thought the pulled pork sandwich was pretty good. There was a ton of pulled pork on it and the BBQ was a sweet sauce which I like. Honestly, my only complaint would have been that there wasn’t enough sauce for my liking, but that wouldn’t deter me from ordering it again, if we ever go back.

That being said though, while the sandwich was delicious, the fries on the other hand were disappointing. Not because of the taste, they were actually pretty good fries, but it’s pretty obvious they are frozen fries from a bag and we got the end of the bag. I don’t think there were more than a handful of fries that were longer than an inch, which was super annoying.

Taste wise though, everyone really enjoyed all of the food we ordered, so no major complaints there.

Our service throughout the night was fine. I totally understand that they just opened a few days before we went, so the few minor hiccups with our bill at the end were fine, not enough to complain about, or anything that would make me not want to go back. Our server was as attentive as she could be, but you could tell she had too many tables to handle, which tends to be the case when a restaurant first opens…

So really, no issues with our service what so ever. All our food and drink orders were correct, so no issues there.

This is where this restaurant is going to fail…

Murray Bros. Restaurant is attached to the Crowne Plaza Hotel in Rosemont, which is across the street from the main entertainment district, which has a big, free, parking garage that you can park in… until 10PM. While it may seem close, the parking garage is still a little bit of a walk, and I don’t think people are going to walk away from all the options on that side of the street, just to come to a loosely themed Caddyshack restaurant.

Oh, but wait, there is a huge parking lot right next to the restaurant that you can park in, which is extremely convenient… until you go to pay.

The lot directly next to the Caddyshack Restaurant actually belongs to the Crowne Plaza Hotel, and therefore is not free. However, if you plan to stay for under 2 hours, you can get a validation ticket at the host desk at the front of the restaurant and not have to pay anything. The problem is, not many people can be in and out in 2 hours if they plan to stay and hang out with friends.

I mean, we were there for over 5 hours…

And since we were there for over 2 hours, we couldn’t take advantage of the free 2 hour validation. Instead, the validation tickets did take 2 hours off of our time spent, so we only had to pay for a little over 3 hours, but over 3 hours is $25!!!!!! Which is absolutely insane. This isn’t downtown Chicago, there is no reason I should have to pay what I assume is the hotel’s overnight rate, if I’m at a restaurant on their property for more than 3 hours, that’s ridiculous.

Even if you’re there for under 3 hours, it’s still $15 to park in that parking lot, which is ridiculous. I was willing to spend the $15 to hang out with a bunch of friends I haven’t seen in a while, but to pay $25 immediately turned us off to ever coming back. We even complained to one of Bill Murray’s brother, whom we met at the front of the restaurant when we were leaving, but even the staff had no clue how the parking situation was supposed to work, and even they seemed a little confused as to why it was $25 to park.

One of the members in our party actually got one of the managers to reimburse him for the parking, but that’s not my style. The machine spit out the correct number so I paid it. I would say that the staff at the restaurant needs to be more clear on what the validation gets you and how much it’s actually going to cost when you leave, but we were there for 5 hours, so I’ll eat the $25 this time.

Even if the manager had reimbursed our entire party for their parking, I would still have complained here, since it’s absolutely ridiculous to have to pay that much money for parking for a restaurant.

And I totally understand that it’s not the restaurants fault, since the parking lot is owned by the hotel, but the restaurant should make it clear to patrons how much it’s going to cost to park, or maybe work out a better deal with the hotel.

Oh, and another little annoyance is that the bathrooms aren’t located in the restaurant. You have to walk into the hotel and over by the banquet halls in order to take a leak. Another little minor thing, but those minor things are all part of the experience.

Like I said before, we enjoyed the food and the atmosphere, and it’s a great location for this group of guys to meet up, but because of the parking situation, I don’t think we’ll ever be back, and I can’t recommend it to anyone without warning them first about the parking situation.

And while it wasn’t as “Caddyshack” themed as I was expecting, it is a nice space, and if I were staying in that hotel, it would be a great place to grab a drink and some food, but I’m not sure it’s worth venturing out to Rosemont for… sorry Bill (and brothers). I think I’d probably rather go back to Hofbrauhaus instead.