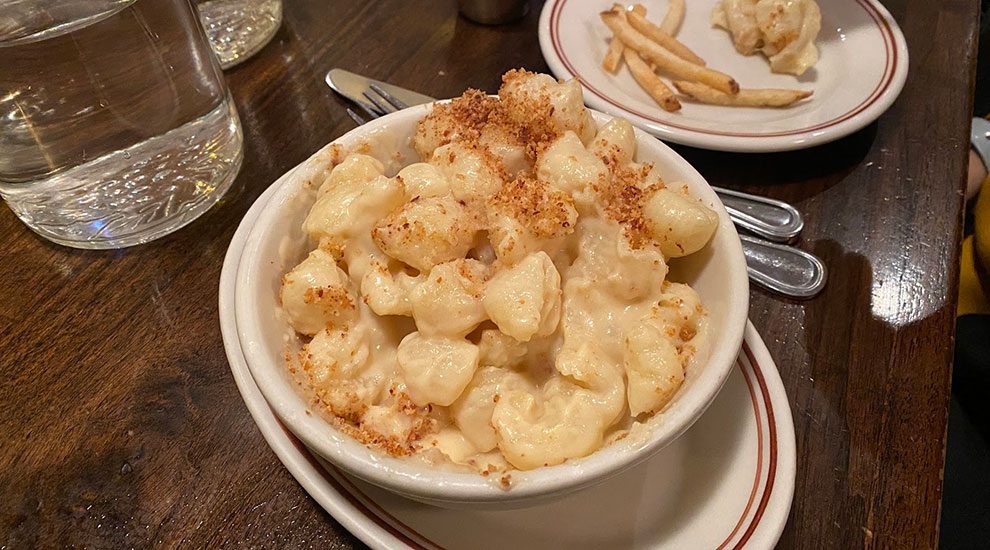 I don’t believe that I’ve been to any of chef Stephanie Izard’s restaurants in Chicago, so I was excited to check out the Little Goat Diner once Chicago started opening up restaurants to indoor seating. At the time we went, I was still pretty hesitant about eating indoors, but I felt that a restaurant of this caliber, and with Izard’s reputation, that they would be taking things seriously, and it would be as safe as it possibly could.

Which it was… but the way it was handled was a little disappointing.

I’ve never been to this restaurant before so I have no concept of what it looks like during non-covid times, but when we arrived you could tell that it wasn’t going to have the same feel that it does normally. Which I can’t fault them for at all. It’s obvious that this was the way they felt would best allow them to re-open and keep their staff and customers safe, so I don’t want this to come off as a knock against the restaurant, more of just me being disappointed that I wasn’t able to experience this place for the first time when COVID wasn’t a thing.

Basically what I’m referring to is the fact that customers could only sit at the booths along the windows on either side of the restaurant. The restaurant is located on the corner of a block, so booth seating along the windows, which run perpendicular to each other, was all that was allowed. Instead of having their larger seating area in the middle of the restaurant, it was blocked off with a black curtain and you could tell that all the tables, and whatever else needed to be out of the way, was just piled up in that center section.

Like I said, I can’t fault the restaurant, but it was disappointing that the atmosphere wasn’t what I was hoping. I was hoping they could have at least spaced out some of the center seating/tables and allowed customers to sit there instead of just blocking it off with a black curtain, but if that’s what they felt they had to do to make it safe for everyone, I respect their decision.

So unfortunately, which is strange for me, I did not take pictures of anyone else’s food, just the food I ordered, so that’s all I’m going to talk about in this post. I did, however, get a pic of the starter we ordered, which was phenomenal.

When I was first told that we were going to Little Goat Diner, I had no idea what to expect. I’ve heard of Girl and the Goat and I’ve looked at the menu and it didn’t seem like there’d be much there that I would want to try (not that I wouldn’t, but I would just let the table order). Thankfully Little Goat Diner is more my style with it’s sammiches, starters, and breakfast food.

We started with drinks… and I just went with Tito’s and Soda, so nothing exciting there, but we also ordered the mac n cheese and an order of fries. 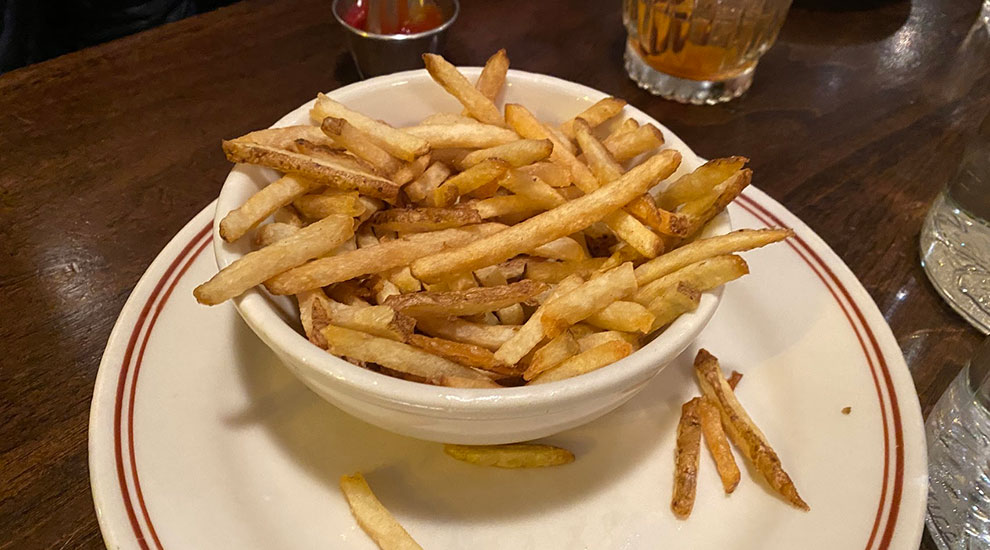 I don’t know what it was about the fries, but they were amazing. They are called “smoked fries” on the menu, so I’m not sure if they are prepared a different way or what, but they were some of the best fries I’ve had in a long time. 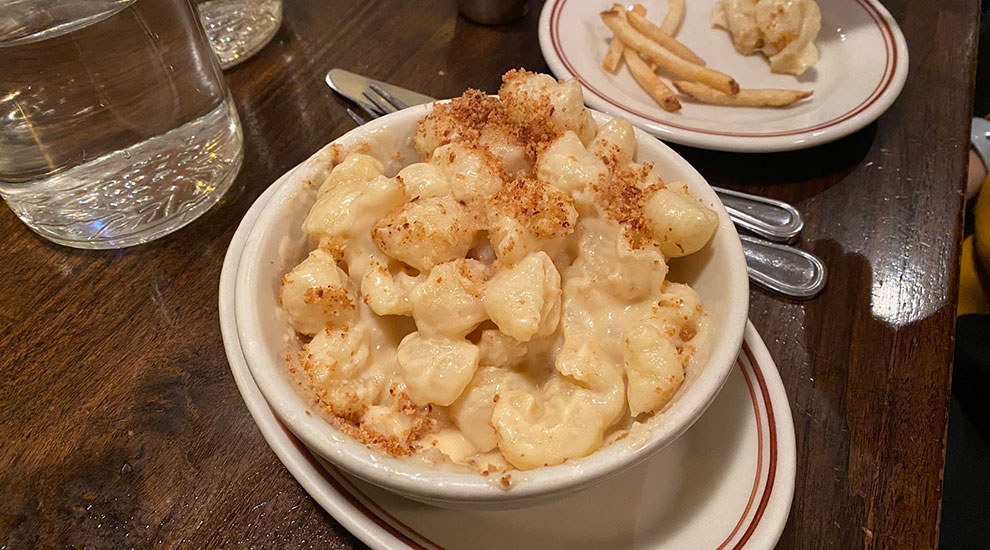 Next up we ordered the mac n cheese… Oh. My. God. This was some of the best mac n cheese I’ve ever had, and usually if it uses some weird cheeses, or I don’t know what cheeses are in it, I shy away from it or don’t like it. But in this case I had no idea what kind of cheese they used, but it was downright delicious. I was the only one still munching on it even after everyone finished their meals. It was that good, so I highly recommend the mac n cheese if you hit up Little Goat Diner.

As for our entrees, I didn’t take pictures of everything so I really don’t remember what everyone had, but I know I had the Fried Chicken Sammie and it was amazing. 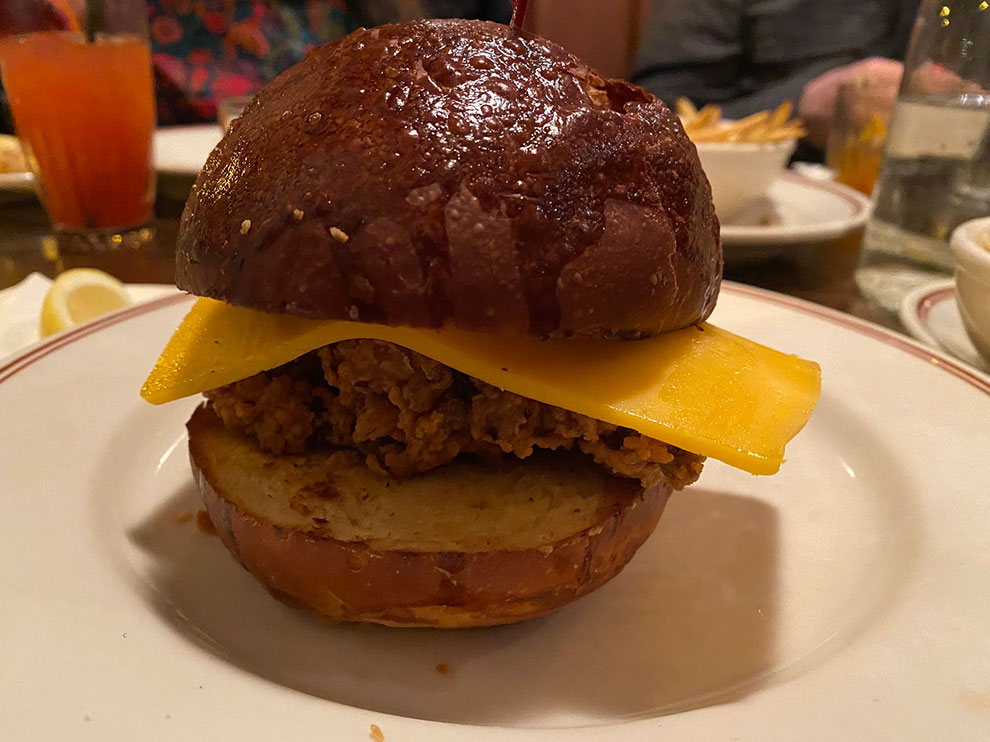 Of course I had to special order it though because I know I don’t like the other things that come on it. So my sammie literally only had fried chicken and Tilamook cheddar cheese, but if you were to order it the right way, based on the menu, it would have also had bread and butter pickles, pickled red onion, Jan’s hot sauce and mayo… which is actually how Nick ordered it and he enjoyed it, so it’s probably pretty good the normal way also.

The chicken was crispy on the outside, juicy on the inside. The outside had great flavor and the cheese hit just right… Definitely better than any of those fancy fast food chicken sandwiches you can get these days.

I would definitely go back to Little Goat Diner once things get back to “normal” and the atmosphere is a little better, but the food was all amazing. I’d love to try their burger and/or their breakfast next time we go though, because everything on the menu sounded so great it was hard to make a decision.

Oh, and I guess there’s some sort of bakery attached to the diner, I don’t know what it’s called, but the chocolate chip cookie from there was absolutely amazing. I didn’t even eat it until the next day and it was still soft and gooey… oh man… so good. 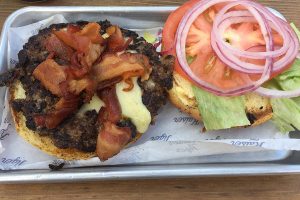 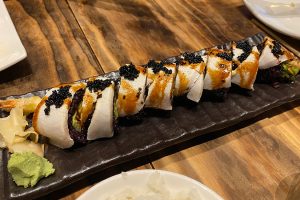