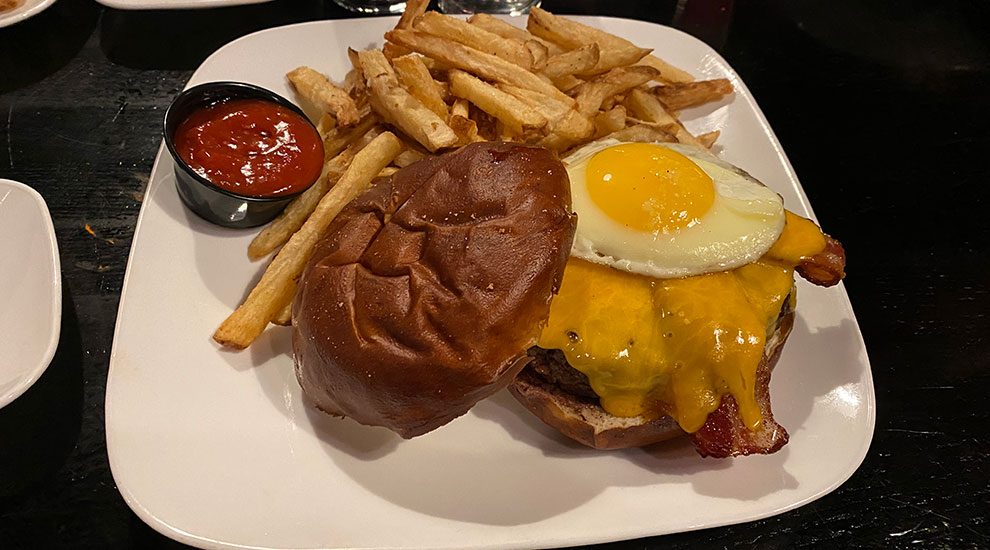 Years back I remember hearing about this incredible burger joint in Chicago that blows out your skull with ear piercing heavy metal music, while blowing out your belly with gut busting cheeseburgers. Kuma’s Corner seemed like it was at the top of everyone’s list when you asked them what their favorite burger place in the city was.

Sadly, I still haven’t made it down to the original location, and unfortunately I feel like the the burger revolution has come and gone, and while Kuma’s has a delicious burger, it wasn’t able to withstand the heat coming out of the kitchen…

But that’s not saying that they have a bad burger, it’s just saying that so many burger-focused places have popped up in the last X amount of years since Kuma’s originally opened (or started gaining notoriety), that they may have been left slightly behind.

Thankfully for me, I didn’t have to make a trip to the city to experience their burgers since they’ve started opening locations all around the Chicagoland area. And while I’m not sure if these new locations in the suburbs compare to the original (I’ve heard the music isn’t nearly as loud in the new locations), the food was still delicious and the service was great.

I finally got to head over to Kuma’s Corner in Schaumburg about a week before Halloween to meet up with some old co-workers for our annual gathering (we should not do this only once a year), so I was pretty excited after hearing the hype for so many years.

The restaurant itself, in Schaumburg, is located in a newer strip mall, and it feels like it. It feels like a new restaurant… if that makes sense. The music wasn’t super loud, it didn’t have a grungy, metal-type of feel to it, it just felt like a restaurant that played metal music (at a reasonable volume) and horror movies on the TV (for Halloween).

That being said, the patrons of the restaurant had that metal vibe to them. Lots of black clothing, lots of tattoos, lots of piercings, lots of generally good people that just tend to dress a bit differently… the atmosphere was awesome.

The fact that they were playing old Tales from the Crypt episodes on the TV for Halloween was just icing on the cake.

The restaurant is nice. There’s a huge bar that encompasses the center of the space, with highboys around it and booths and tables surrounding those, nothing fancy, but it works.

When I got there it was already almost 7:45PM on a Thursday and the place was pretty crowded. My friends had found some seats at the bar, so we posted up there for a while, but within 5-10 minutes of me getting there we were able to move to a high-top just behind us… it’s much easier to talk to each other at a high-top.

We were still waiting for a 5th member of a party, so we decided to just chill and order a quick appetizer for the table to hold us over until he got there (even though it didn’t matter because when he did get there, he told us he wasn’t eating anyways… and he’s a vegan… but they do have an impossible burger there, so there are definitely options if you don’t eat meat).

While we waited we put in an order of the Buffalo Chicken Tenders… and if you do not like buffalo sauce, these are definitely not for you.

I’m not a huge fan of buffalo sauce, so I did not partake in any of these, but the guys that did really enjoyed them, despite the heat that was expelling from their faces.

If you’re not a fan of buffalo sauce, I would not order these. They aren’t the type of food you want to test your buffalo sauce tolerance on, that’s for sure.

So after the buffalo sauce dissipated from my eyeballs, our 5th party member arrived and it was time to order some burgers.

The burger menu has a variety if cheeseburgers all named after various metal bands, as per the theme, but I decided to keep it traditional with the Famous Kuma Burger (pictured at top).

The Kuma Burger is a pretty basic cheeseburger with a fried egg, applewood smoked bacon, cheddar cheese, lettuce, tomato and onion… but of course I left the lettuce, tomato, and onion off… nobody needs that rabbit food.

Now if you’re used to those thin, griddle patty, burgers that most places are serving up these days, then you might be a little disappointed. Kuma’s burgers are thick 10 oz. single patty burgers that are big, juicy, and delicious.

These days I do tend to prefer those thinner patties for my burgers, but the burger at Kuma’s was pretty good. I still wouldn’t rate it as my favorite burger in the Chicagoland area, but it’s definitely up there, and beats out a lot of the burgers I’ve had over the years.

It was even really good the next day, since I brought half of it home, because I had already eaten dinner before we got to the bar, but couldn’t pass up the chance to eat one of the burgers.

As for the other members of our group, I can’t remember exactly what everyone got, but I’m going to try to guess based on the photos I took.

We had one Kaijo, which consists of bleu cheese crumbles, applewood smoked bacon, and frizzled onions.

And we had one Iron Maiden, which consists of cherry peppers, pepperjack cheese, avocado, chipotle mayo, lettuce tomato, and onion.

Everyone really enjoyed their burgers, so I can’t really say anything bad about any of them.

All our food was delicious, our drinks were cold, and the service was great. Definitely didn’t have any complaints about Kuma’s Corner in Schaumburg and would definitely come back again if the situation presented itself…

Just not sure it would be a great place for the kids… not that they wouldn’t be ok in here, I just don’t think they’d eat anything to make it worth it… 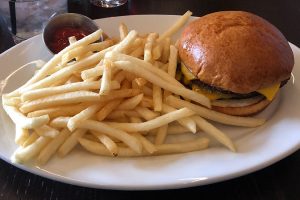 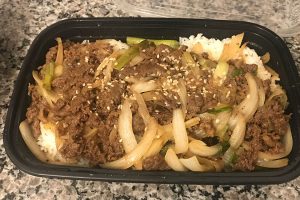