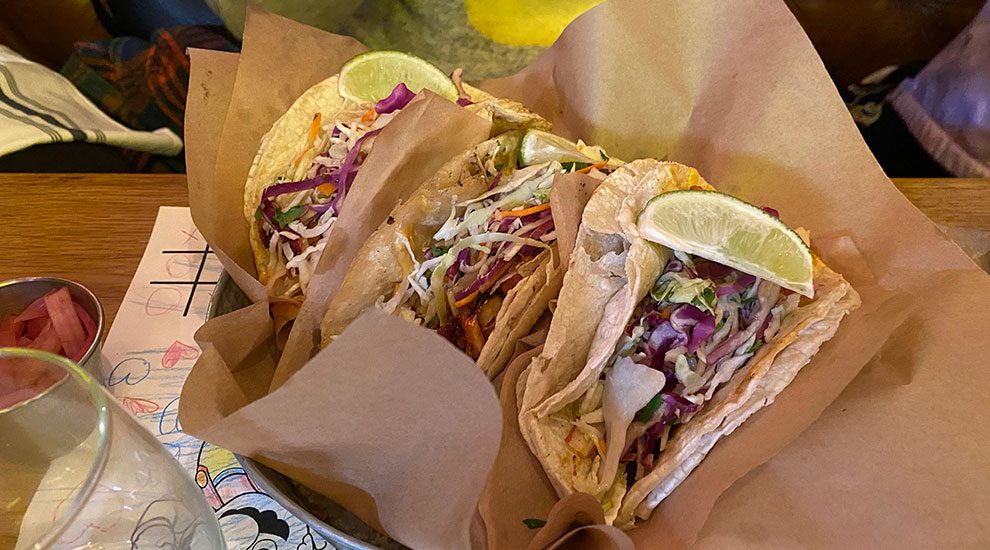 The last time I was at Holt’s restaurant in Park Ridge was on October 1st of 2017, the day after my son was born… that’s 2 years ago, and way to long to go between visits to this restaurant.

And yes, you read that right. While my wife was recovering in the hospital after the birth of our second child, I went out to dinner instead of having to eat another chicken sandwich from the hospital cafeteria… but it’s not as selfish as it seems, maybe.

I definitely had my wife’s permission, so she was totally ok with it. There is no way I would gone had she had an issue with me leaving the hospital for a couple hours. Plus my brother and his wife were in town from Texas and we rarely get to see them. So after they came and met our son at the hospital, I got to leave and spend some time with them before they made their way back home. But really, the point of this whole part of the story is that it’s been just over 2 years since I’ve been to Holt’s (longer for my wife) and after visiting again this past weekend, we’re not sure why we waited so long to go back.

I wrote about Holt’s when we visited for the first time back in 2016, so this is going to be sort of an update to that post, 3.5 years later. It’s funny though, because I reread that old article before starting this one and realized that I ordered the exact same thing this weekend that I did on that very first visit… and guess what, it was even better than I remembered it being that first time.

So even though I’ve written about Holt’s in the past, I want to quickly catch everyone up to speed if they haven’t read my previous review.

Holt’s is an American restaurant located in Park Ridge, IL that serves up all your favorites like salads, burgers, wings, cheese curds, and of course, New Haven-style pizza, all of which is delicious.

The restaurant itself is very modern with a full bar located along one of the walls, with tables filling up the rest of the space, along with an awesome patio out front for when it’s warmer out. Sadly, the weather in the Chicagoland area has turned, and outdoor seating is no longer a viable option. But if you’re looking for a great place to eat outside during the summer months, I highly recommend Holt’s. However, even with the cold weather moving in, the interior of the restaurant has an incredibly warm and inviting atmosphere. Even though I don’t live in Park Ridge, it just has that feel of the neighborhood hang out. Like, this is the place you would run into someone you know from town on a Friday or Saturday night.

Which is ironic, because our good friend Joe, who we were dining with, actually ran into a girl he met in college as we walked into the restaurant. He hadn’t seen her in years, so it was quite the coincidence.

This is also a good place to bring the whole family, including children. On this occasion we had our 4.5 year old daughter and our, now, 2 year old son (the same one that my wife was with in the hospital when I ditched her the last time I was here). The kids menu items consist of a personal pizza, sliders, pasta or grilled cheese.

Take note though, if your kids are super picky, like mine can be, the grilled cheese is made with white American cheese. And yes, it is way more delicious than Kraft singles, but if your kids are particular about that yellow/orange cheese look, they may be disappointed when their sandwich arrives with white cheese instead.

I know mine were… although my son still picked at his, my daughter didn’t really want anything to do with it and stuck to cheese curds and calamari for dinner… Sometimes you’ve just gotta pick your battles, and this isn’t one I was willing to fight.

As soon as we sat down we were greeted by our server who explained to me that the bacon cheeseburger with donuts for buns that I saw on Instagram, was only a special that they served up last Wednesday… so needless to say I was pretty bummed. But when our order of cheese curds arrived for the table, that all changed.

We’ve ordered the cheese curds pretty much every time we’ve come to Holt’s so I know they are delicious, but for some reason they tasted extra good this time… as did the calamari, which I’m not sure we’ve ever ordered.

The cheese curds have an extremely light outer fried shell to them that compliments the Wisconsin cheddar inside perfectly. I could probably have eaten two orders of these by themselves as my entree if I wanted to, but I restrained myself as best as I could and also indulged in some of the calamari.

The calamari was also very lightly breaded and fried which really drove home the fact that there’s no way these things are frozen… If they are, they are the best frozen fried calamari I’ve ever had. The breading is perfectly crunchy, seasoned to perfection, and the actual squid almost melts in your mouth.

I’ve had a lot of fried calamari over the last few years and the majority of the time it’s chewy or overcooked or, like one time at a restaurant I won’t name, still has some plastic pieces from the bag it came out of the freezer in (that was gross). But this fried calamari was the exact opposite of all of those experiences. Even Joe said there was something about it that just put it on another level, and he’s been in the food industry for a while now!

Oh, and even though we didn’t order them, don’t sleep on the cheddar fries… those are insane. Had we not ordered cheese curds, we definitely would have ordered them, but too much cheese can be a bad thing (even though cheese is delicious).

With our appetizers completely demolished, it was time to order our entrees.

Yup, we were so busy eating the appetizers and talking that we totally forgot to look over the menu to see what we actually wanted to eat. So thank you to our awesome server who was patient with us while we took our sweet ass time ordering our food.

Thankfully though, we had put in the kids’ orders with the appetizers, so their food came out early, even though they didn’t really eat any of the grilled cheese, as I mentioned above. But they did eat their fair share of calamari and cheese curds, so it’s kind of the same thing…

Surprisingly, nobody ordered one of the pizzas this time, even though it sounded like Joe was excited about reading that they are New Haven-style pizzas, so I guess we’ll just have to save that for next time. I probably would have gotten myself a pizza, but during football season we usually order pizza on Sunday nights for dinner, so I didn’t want to eat pizza two nights in a row… although I’ve eaten pizza for every meal during an entire week before, so I’m not sure what was truly stopping me, but it might have been the thought of that donut burger that I wasn’t able to try.

And since I couldn’t get the donut burger, I went with the next best thing… just a normal cheeseburger with white American cheese and a fried egg on top, which is basically my ‘goto’ order anywhere we go if I can’t decide on something. And I wasn’t the only one to order a burger this time, Sheila also ordered the House Burger.

As for my burger, it was absolutely delicious. I know I said that I ordered the exact same thing the very first time we visited Holt’s, but I don’t remember the burger being as good as it was this time. Even though it was just a super basic burger, the meat itself was perfectly cooked, seasoned, and clearly freshly made. The cheese stood out as well. I rarely have an opportunity to have white American cheese outside of of a Subway sandwich (and who knows if it’s even the same white American cheese), so to have it on a burger was a nice treat. And maybe it’s exactly the same as Kraft American cheese, but the white color of it just plays differently in my mouth, in a good way.

The only thing I would probably change about the burger was the way the fried egg was cooked. I find that most places that I order a fried egg on my burger, tend to cook the egg more sunnyside up or over easy, so that the yolk spills out with the first bite/cut… and I feel that’s the way it should be. At Holt’s they appear to break the yolk and cook the egg & yolk completely through. And that’s not a bad thing, an egg of any kind still adds deliciousness to a burger, but I do prefer the runny yolk way myself.

As for the other entrees at our table, my wife ordered the Fish Tacos which are made with wild Alaskan cod, red & green cabbage, pickled red onion, chipotle mayo and fresh lime. She loved them. She’s a big seafood eater, so whenever she gets the chance to order fish, she usually takes advantage. And since nobody was really looking to split pizzas this time, she was able to order her own fish entree.

And as for Joe, I believe he ordered the Salmon BLT, but I could be totally wrong… and of course I didn’t take a picture of it, so we’ll just assume that’s what he ordered and that he enjoyed it.

Oh, and we also ordered the Chocolate Chip Cookie dessert, which comes with 3 medium size chocolate chip cookies per order. They are warm and gooey, and ours were served with a side of chocolate fudge… definitely recommend these with a glass of milk.

Honestly, everyone enjoyed all of the food that we ordered (except the kids meals, only because they are picky about the color of their cheese… I think they take after their dad). I actually don’t think anyone finished all of their food because we ate so much of the appetizers, and drinks, that we were too full. So we all ended up with lunch leftovers, which I ate today for lunch and the re-heated burger still tasted really damn good for being heated in a microwave.

So as I keep reiterating here, and on Instagram posts, Holt’s in Park Ridge is an awesome place to go, and probably one of my favorite new restaurants that I’ve been to in the last few years. I only wish we went more often, but after this last visit and being reminded of how great it is, I think we’ll be back sooner rather than later. Especially if they have that donut burger again… I’ll go back by myself just to try that thing…. 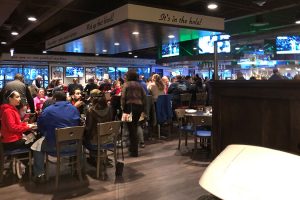