It finally worked out. We made plans to go out with our close friends for dinner, our babysitters were ready and willing to watch the kids, and none of our kids got sick hours before we were supposed to go. It was a f—ng miracle.

Everything was going well, until I looked at the menu.

My wife had made a reservation at Ella Elli on Southport in Chicago like a month ago, but for some reason it had never occurred to me to check the menu. She just kept telling me it was a nicer restaurant with American food… like octopus…

Now, in my mind American food is like burgers, steaks, chicken… shit like that. Octopus is not the first thing that comes to mind when I think of American food, but maybe it’s just me?

After browsing through the menu a few hours before we were supposed to leave, I was pretty much convinced that there was nothing I was going to eat, and/or enjoy. They do have a burger on the menu, but the word ‘burger’ was followed by a bunch of words I didn’t recognize, and therefore knew that I probably wouldn’t eat…. but, that’s kind of what this site is supposed to be about, me trying things I wouldn’t normally try.

So that’s what I was going to do.

Ella Elli is part of the 4 Star restaurant group that includes places like Smoke Daddy and Crosby’s Corner (which is right next door to Ella Elli.

The restaurant itself definitely feels a little more upscale than either of those other two restaurants mentioned above, but that’s kind of what I was expecting based on the menu.

We had a 7:15pm reservation on Saturday night and were promptly seated as soon as we arrived. It was a beautiful night outside so a lot of people were sitting on the patio, but the ambiance and feel of the inside of the restaurant was perfect. Our booth was right near the sidewalk with an open window looking at the patio, which gave us a nice taste of outside, without actually being outside. And even though it was getting a touch chilly outside as the night went on, it was actually colder inside the restaurant than it was outside, so the open window was nice.

I would recommend making reservations though, especially if you want to drop in for dinner on a weekend. The restaurant itself is not that large, so seating is a bit limited. The bar in the middle takes up quite a bit of space too.

As far as our service goes, our waiter was great. His section was a little slow, so he was very attentive and extremely helpful in explaining all of the various foods on the menu that I didn’t know. Funny enough, he actually raved about how good the burger was, which made me feel better about it, but then he started explaining all of those words next to the word ‘burger’ that I didn’t understand, and it made it sound less appetizing… but other than that, he was extremely helpful and attentive throughout the whole night.

So as I mentioned before, after glancing at the menu earlier in the day, I really wasn’t sure what I was going to want to eat when we got to Ella Elli. The menu seemed a lot fancier than I’m used to, and a lot of the foods on there weren’t familiar to me at all; I had no clue what they were.

The cured meats were decent, but I’m not sure that anyone was really impressed. One member of our group is a vegetarian, so she just stuck to the pickles, but based on what was left on the plate when we were all done, I don’t think the rest of us really cared for the meats that weren’t Prosciutto (I think..).

The other two meats just weren’t as good, and I honestly don’t even remember what they were. I just remember one of them being tough and chewy, and the other was a bit spicier than I like.

As for the pickles, I didn’t try them as I’m not a fan of pickles, unless they are sweet pickles. I did enjoy the bread that came on the plate though… if that helps.

After finishing all the Prosciutto, I decided I was going to try a bite of the avocado toast, even though I know I don’t like avocados. But it’s one of those foods that everyone seems to rave about for some reason.

It was ok, but knowing I don’t like avocados, it did absolutely nothing for me. It was just sort of a weird, creamy, green bread, with an egg on it… I don’t know why this is so popular with people.

The single bite I had just reaffirmed my stance on avocados and ensured that I would never spend my money on a piece of toast with it spread on top of it… However, the plate with the avocado toast on it was clean by the time the server took it away, which is more than I can say for the cured meats plate, so obviously people that like avocados enjoyed it.

For our next course of food we ordered the cauliflower with salsa verde, lemon and shallot (pictured at top), as well as the grilled octopus with crispy potato and salsa verde…. and I ordered a burger… plain.

I did not try the cauliflower as, again, I know it’s a food I don’t like, and I was saving my adventurous food eating for the octopus.

Everyone else did seem to enjoy the cauliflower though, so I’m sure if you like that sort of thing, it would be worth ordering, but not for me.

Now lets talk about the food that my wife was dying to order, yet didn’t think in a million years I would actually try… the grilled octopus.

The grilled octopus came highly recommended by our waiter, which wouldn’t have mattered cause my wife was going to order it anyways, but at least we knew that it was one of the top dishes on the menu.

It came out and I was pleasantly surprised by now non-octopussy it looked. I get weirded out by the tentacle-shaped calamari that comes out when we order fried calamari at restaurants. I’m more of a circle squid guy.

So the presentation and the look of the octopus was reassuring and made it easier for me to convince myself to actually try it.

The taste was what I imagine that calamari tastes like when it’s not deliciously deep fried. It had sort of a rubbery, chewy consistency, with a slight fishy taste to it, but nothing overwhelming. The salsa verde added a nice little kick to the dish, and everything was piled high on top of a few potatoes.

All in all I actually thought the octopus was pretty good. Again, it’s not something I would order for my own entree, as I don’t think I could eat an entire plate of it, but as an appetizer, or just to have a few bites off of someone else’s plate, I’d have it again.

In the grand scheme of things, it was probably less weird than the burger they have on the menu…

I did end up ordering the burger, which was another favorite of our server, but I’m sure he doesn’t order it straight up plain… meat on a bun.

I actually didn’t even consider getting the burger when I first looked at the menu because I wasn’t sure what everything that come on it was, but I knew I would be hungry if I didn’t order something else to eat… and I’m actually surprised nobody else ordered more food, because we really didn’t order that much…

Now, cause I know you’re all wondering, here is how the burger is listed on the menu: Burger Au Poivre with St Andre Triple Cream, Watercress, and Cornichons.

I literally didn’t know what anything after the word “burger” was.

Apparently, Au Poivre is a cheese similar to brie, which I don’t like, so that wasn’t going to happen. The St Andre Triple Cream is a cream sauce that comes on the side for dipping. Watercress is just a leafy green that garnishes the burger. And cornichons are pickles. And then, what they don’t put on the menu, is that the burger also has onions and dijon mustard on it… and since I can’t eat onions, and I won’t eat dijon mustard, it was just a plain burger on a bun for me.

I would have asked for ketchup, but I already felt like an asshole asking so many questions and then just having them make it totally plain, that I just sucked it up and ate it as it was. And it wasn’t bad. Obviously do not judge this burger based on my review here, because I’m super picky and this is not normally how the burger comes, but the meat and bun were very good. The burger was cooked exactly how I asked, and I even took half of it home to eat the next day. Although, I did smother it in Merkts Cheddar in order to finish it… so much better than Au Poivre cheese if you ask me.

So overall I think everyone enjoyed their food at Ella Elli and I even surprised myself by trying the octopus. I would say though, if you’re a super picky eater like me, it might not be the best place to go. At least check out the menu first and see if it appeals to you.

If you’re a non-picky eater, I’m sure you’ll find the food, atmosphere, and service definitely meets your standards. It’s a great place to go on a date, or with a few friends. I probably would not bring my small children here though, just a fair warning. There were a few kids that came in at one point, and I’m curious if they found anything to eat, or if there’s a kids menu they neglected to offer me…

And I don’t know if it was just cause we really didn’t order a ton of food, or what, but I was surprised at our reasonable our bill was at the end of the night. I think three of us only had one drink, and one of us had two, and then with all the food, tax and tip, it was only like $130… which seems reasonable to me. Especially since our trip to The Loyalist a few weeks ago cost about $130 per couple I believe, but we did order considerably more food that night.

So who else has been to Ella Elli? What else should people try that we may have missed? I did really want to try the lamb sausage, rapini, olives, and lemon oil pizza, but our server said it was a bit on the spicy side, so we avoided it… but it still sounds delicious. 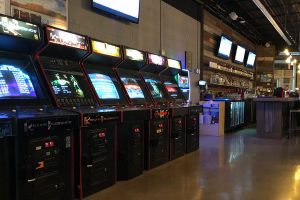 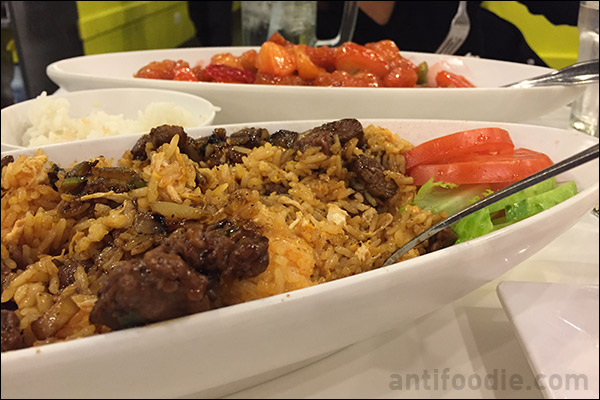