Four Loko used to be known for their extremely potent mix of alcohol and caffeine packaged in giant cans, that were fueling colleges around the country. But after some changes in the law, they were forced to remove the “uppers” from their drinks and they sort of faded out into the background.

Personally I think I’ve only had maybe one sip of a Four Loko drink in my entire life up until last week when I decided to pick up a can of their new Four Loko Hard Seltzer, and the sip that I did have was during a softball game and it was purchased more as a joke than anything. It’s definitely not my first choice of drink when I want to drink, no matter how badly I feel like getting drunk. The regular versions are just awful tasting, so I’m not really sure why I thought the hard seltzer would be any better, but that’s what I wanted to find out.

Various brands of Hard Seltzers have been booming since the summer of 2019 with brands like White Claw and Truly leading the pack, but that hasn’t stopped other brands from trying to capitalize on this new found interest. Brands like Corona and Bud Light have recently released their version of hard seltzers to try and compete with the other brands, but both have fallen a little short of what I’ve come to love about White Claw and Truly. Bud Light Seltzers is definitely a more worthy competitor than Corona, but both hold their own and are decent entries into the market.

But what about Four Loko?

At the end of the summer of 2019, Four Loko posted an announcement on their social media that they would be releasing a Four Loko Hard Seltzer into the market with 12% alcohol, which is absolutely insane, especially considering that the other brands all hover between 4.5% and 5% alcohol content. The hard seltzer was going to be in their tradition 24 oz. cans and would come in a Black Cherry flavor.

All sounded “ok” I guess, I mean, I like the black cherry flavors of other hard seltzers, and 12% alcohol would mean I could probably just sip on one all day instead of drinking multiple cans of something to get a buzz going, but I had my doubts about the taste just based on that single sip of Four Loko I took over the summer at a softball game.

It did take me a while to actually find one though, but when I was out picking up a case of the new Corona Hard Seltzer at the local liquor store, I managed to find a can of the Four Loko Hard Seltzer as well.

So with the can in hand I made my way home to try it out… and I’ll admit, I was kind of dreading it.

Over the past couple weeks I’ve decided to step up my efforts on building out the Antifoodie brand, and in doing so, I started a YouTube channel that captures me tasting these things for the very first time. So naturally it only made sense for me to make a video of the Four Loko Hard Seltzer tasting… and I’m glad I did, because this stuff is absolutely disgusting.

Like I said, I’ve only had a single sip of a Four Loko in my entire life, so I wasn’t really sure what to expect, but what I got did not taste like any of the other hard seltzers I’ve tried.

It almost tasted as if they had to mask the insane alcohol flavor with a ton of sugar and artificial flavoring, just so they could say they had the highest alcohol content of any hard seltzers. It is really not very good.

I guess I could see you liking it if you’re a fan of Four Loko in general, or you like extremely sweet drinks, but if you’re a fan of hard seltzers you are not going to like this at all. It’s not refreshing, it’s not light, it’s basically gross sugar water.

So I can’t really recommend Four Loko’s Hard Seltzer to anyone that is a fan of the other brands of hard seltzers out there right now. You will absolutely be disappointed if you’re expecting this to taste anything other than a pile of hot garbage mixed with sugar.

I would even take the mixed berry City Water hard seltzer that came in dead last in our hard seltzer blind taste test that we did a few months ago, over this.

So do yourself a favor, don’t even bother picking this up even if you’re curious about it, it’s seriously gross. If someone out there actually likes it, when compared to other hard seltzers, I’d be extremely surprised. Now, if you’re a fan of Four Loko in general, then you may enjoy this, but calling it a hard seltzer is a huge stretch. 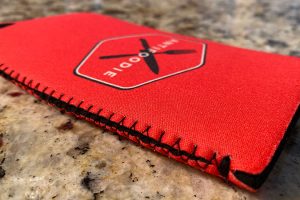