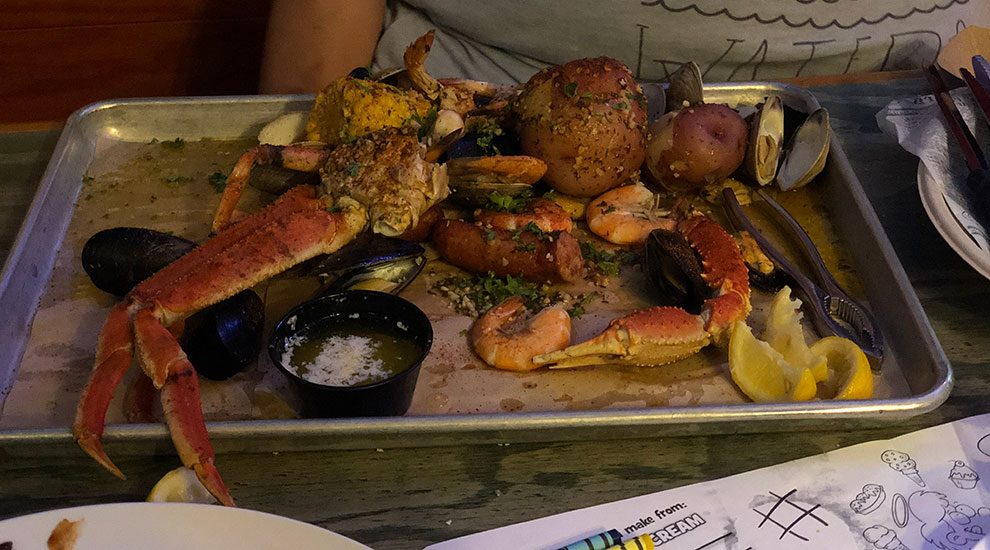 After my last review you think I’d stay away from seafood restaurants for a while, but instead, here I am, at Crabby Bills Seafood Restaurant in Indian Rocks Beach Florida… Eating yet another non-seafood meal and writing about it so that anyone who doesn’t like seafood, and is thinking about coming to this restaurant, knows what they may, or may not, be able to eat…

And those that do love seafood, well, you’ll just have to check out the restaurant for yourself and make up your own mind. Although I did try my wife’s fish this time, which I will get into in a little bit.

But, as with anything on this ridiculous website, take it with a grain of salt, because I don’t like food… especially seafood…

I guess there used to be another Crabby Bills location in Clearwater Beach, FL, but it appears to have closed down, so we visited the one in Indian Rocks Beach, which is apparently ‘The Original’ Crabby Bills.

First thing to note, they do not take reservations no matter what day of the week it is. We went on a Tuesday night at 6:15pm and it was a 45-60 minute wait for a party of 6 (4 adults 2 kids). And considering how big of a tourist area Indian Rocks Beach (and the surrounding areas) are, I would venture to believe that every restaurant in the area is similar in that they don’t take reservations and always have a wait. So keep that in mind when looking for a place to eat with the family while you’re on vacation in the area.

The restaurant itself is exactly what I expected from a seafood place called Crabby Bills. It’s a decent size open area with a U-shaped bar on one side and a dining room on the other. The bar and dining room are decorated with random shit from the sea; fishing nets, fake crabs and lobsters, pictures of people fishing on boats, and a ton of photos of “Crabby Bill” and his family. It’s as if Crabby Bill’s fishing boat exploded inside a building and he turned it into a restaurant.

And that’s not a bad thing, it just fits the stereotype of a family owned seafood restaurant in Florida. But the decor itself doesn’t matter, as long as the food and the atmosphere hold up…

As I said above, the atmosphere was exactly what I expected from this place. Lots of families and tourists filled the dining room and the bar area as we waited for our table. The bartenders were very friendly and quick with our drink orders, and the hostess tried her best to keep the tables filled.

I was surprised to see that they have an more updated system for keeping track of people waiting for tables. I expected them to just use a pen and paper, but they take your phone number and text you when your table is ready. This system is one of my favorite features when waiting longer periods of time for a table to be ready. It allows me to go wherever I want and not worry that I’m out of range of the little pager that some places hand me, or that I will miss the hostess when she comes over to try and find me when the table is ready…

When our table was finally ready, after about 50 minutes, we were seated at a booth in the corner with a high chair at the end for our 8 month old. It was perfect.

There are a bunch of tables in the restaurant that are basically just big picnic tables, so I’m glad we weren’t seated at one of those. It would have been hard with the kids I think. Plus I like having a backrest.

After we were seated our server came over and took drink orders, but most of us already had drinks from the bar, so we just jumped right in and ordered our appetizers and entrees.

I don’t like seafood… it’s no secret and it’s not something I pretend to like. I ate frozen fish sticks with homemade tartar sauce as a kid on nights when my dad was working, but outside of that, we never ate any sort of fish, lobster, crab, oysters, or any other type of sea dwelling creature. My mom probably would have eaten it more, but I don’t think my dad cared for it, so we never ate it.

And that’s probably the exact reason why I don’t care for it now… even though I have tried more of it now that I’m an adult.

That being said, Crabby Bill’s offered a much larger selection of food for landlubbers than Lucky Fish did last week, so we were already off to a better start.

As an appetizer, we went with fried calamari, which is always a pretty safe bet, and was exactly what you expect from fried calamari.

For an entree I decided to go with the BBQ ribs, even though I kind of knew they probably weren’t going to be amazing, since it is a seafood place, but I really didn’t want to eat yet another burger or hot dog.

I was the only one, outside of my 3 year old daughter, that didn’t get seafood, but I did muster up enough stomach strength to try my wife’s fried catfish, which I’ll talk about in a minute.

The BBQ ribs came out with a side of fries and mac ‘n cheese, and right off the bat I was actually pretty impressed. They were piping hot and the BBQ sauce was sweet and tangy. I’m not sure if they make it in-house or if it’s just out of a store bought jar, but whatever the sauce was, it was delicious. It was actually the best part of the ribs themselves, unfortunately. The mac ‘n cheese though, was awesome, definitely get that as a side if you can.

The ribs weren’t bad, and I was probably expecting too much, but they were a bit tough to get off the bone, and weren’t as juicy and tender as I’m used to when it comes to ribs.

Yes, I’m extremely spoiled and very picky when it comes to ribs.

Would I order them again if we were to come back, absolutely. Like I said, they weren’t bad, and they were a great dish for someone who doesn’t enjoy seafood, I’m just a rib snob.

In regards to the actual seafood, that I did not order, everyone seemed to like their food a lot better than their meals at Lucky Fish the week before. But that shouldn’t come as much of a surprise considering Northbrook isn’t really known for it’s fresh seafood, where as Florida has the means to provide some of the freshest.

My brother in-law got the Crab Stuffed Red Shrimp and his wife got the Tybee Island Seafood Plate (pictured at top). Both of them absolutely loved their food. The seasoning was on point, the freshness was apparent, and the flavors were exactly what they were looking for out of their food.

My wife ordered the Fried Mississippi Catfish and she pretty much raved about it after every bite she took. It was like the best food she’s ever eaten, with every bite she took. So, even though I don’t care for seafood, I do like fried food, and she was making it sound absolutely amazing, so I had to give it a try.

It was pretty damn good…

Sometimes I can stomach fish that doesn’t have that “fishy” taste to it, but it’s rare that I say I would actually order something as an entree myself after one bite, but this catfish would definitely be high on my list if we ever make it back here.

The breading was delicious and the fish was flakey and tasty enough for me to actually enjoy it. Now, if we were at a non-seafood restaurant, I probably wouldn’t go out of my way to order the fried catfish, but I would definitely recommend it if you’re a fan of seafood.

So overall Crabby Bill’s in Indian Rocks Beach definitely feels like a touristy place, but the food speaks for itself. If you’re a fan of seafood, you should be able to find something that you really enjoy. And if you’re not a fan of seafood, you shouldn’t worry as you’re not going to leave hungry. As I said, the non-seafood was good, but the seafood is really where this restaurant shines, which is to be expected.

My wife and her family have been coming down to the Redington Beach area for years, but this is the first time that any of them have made it to Crabby Bill’s. But after just one visit, it may have made it’s way on to a short list of restaurants to try again when we’re down here in the future.

Also, if you’re looking for a decent breakfast place, we gave Sweet Sage Cafe a try while on vacation as well.

On our way back from Crabby Bill’s we hit up Haze Ice Cream for an after dinner treat. Probably some of the best ice cream I’ve had in a long time. Get the cookies ‘n cream if you want a flavor explosion all up in your mouth hole.

Have you eaten at Crabby Bill’s Seafood restaurant? How does it stack up against other seafood places? Did you enjoy it, or should we look elsewhere next time we’re in town? Let me know in the comments.