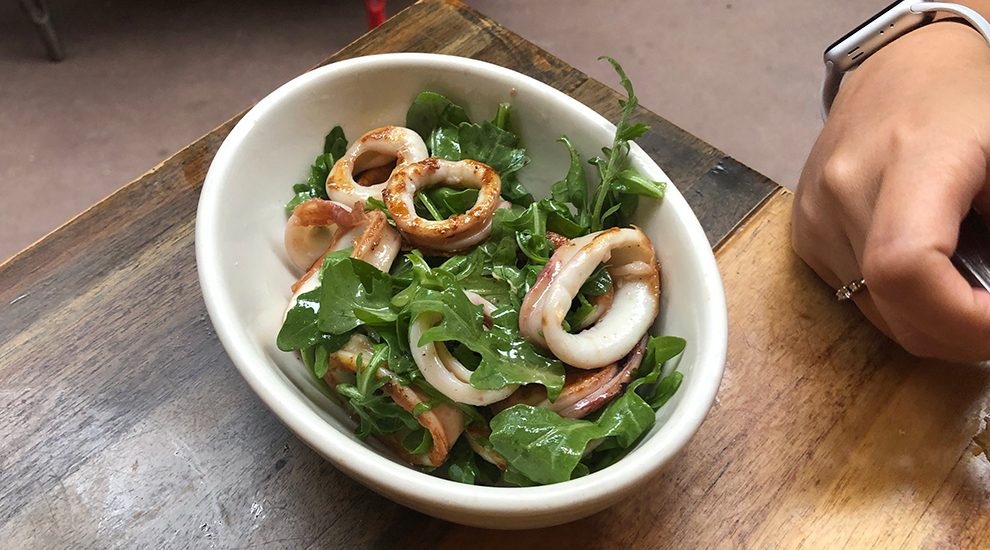 For those unfamiliar with tapas, or what tapas is (are?)… it’s basically small plates of Spanish-style food that, when ordered, sounds like you’re getting a shit ton of food, but in actuality, you receive a very small plate of usually a single item, or just a handful of items. And because of this, you end up either ordering way too much food, or you leave the restaurant hungry. There is absolutely no in-between. Nobody in the history of tapas has ever ordered the exact right amount of food to satisfy all of the people in their party, it’s just never happened.

So basically, that’s why I have a love/hate relationship with tapas-style eateries.

Don’t get me wrong, the food is usually very good, and I’ll get into that in a moment when I discuss the dishes that we ordered at Chicago’s Cafe Ba-Ba-Reeba! further down in this article, but I will preface that by saying, I don’t think we ordered enough food for everyone to be fully satisfied with their meal… or even to get a good feel for all of the menu items that the restaurant has to offer.

This isn’t the first time we’ve been to Cafe Ba-Ba-Reeba!, in fact, I thought it was only the 2nd time that I had been there, but after we arrived and started talking about the last time we were there (and how some of us left hungry), I realized that I have definitely been there at least 4 times in the past.

I’m not sure if that means that it was forgettable, or if it was just that long ago… but to ensure that I never forget about it again, I’m making sure to document our experience in this post.

As I mentioned above, tapas are basically small Spanish-style dishes that are made to be shared. You place your order, usually a few plates at a time, and they are delivered as soon as they are ready. It’s not like ordering a typical entree where the kitchen prepares everything so that it all arrives at your table at one time. If the order is up, it’s brought to the table and ready to be eaten.

When we first sat down, we immediately ordered a pitcher of passion fruit sangria, because sangria is the drink of the Spanish, and it’s apparently the only thing you’re allowed to drink whilst eating tapas. We had arrived about 30 minutes earlier than our reservation, and they were extremely quick to seat us, so we weren’t quite ready to dig into our meal yet, so the drinking commenced instead.

Before we ordered any of our food, our server explained to us what tapas was and how everything worked. While most of us had been there in the past, multiple times apparently, not everyone had, so the server went through his whole rundown. He explained to us that for a party of 4 he recommended between 10-12 plates (could have been 8-10, but I don’t remember for sure), as well as stumbled his way through the specials.

I’m not sure we even knew what he was trying to tell us when it came to the specials because he kept tripping over his own words… needless to say, we didn’t order any of them anyways, so I guess it didn’t matter.

So with drinks in hands, we cheers, and decided to dive in to the menu.

As anyone reading this site knows, I’m a bit of a picky eater. However, when we go to places like this, I sometimes decide that I’m just going to try everything that’s ordered just to see if I like it… and so I can write about it here later. So that’s exactly what I decided to do on this night.

I did also make sure to order a couple dishes that I remembered being pretty safe in order to avoid being too hungry at the end of the meal. So while I did end up trying everything, I think only one of the dishes was actually pretty out of the ordinary for me.

The first thing we started out with was another pitcher of sangria… this time of the peach variety. We had taken too long in ordering that we destroyed the first pitcher and were still thirsty, so keep ’em coming.

The next thing we ordered was the roast dates with bacon & apple vinaigrette. These are always a favorite when we come here… or at least I think they were. It’s a pretty simple dish. You take a date, wrap it in bacon and throw it in some apple vinaigrette… shove a toothpick in it and throw it in your mouth. The consistency of dates always weirds me out a little bit, but when the bacon is cooked perfectly it all kind of blends together for a sweet start to the meal.

After that, I ordered one of my safe dishes in the empanada de carne, or handmade beef empanada. This is one of those dishes that only comes with a single item on the plate, so we ordered two of them. It’s basically an empanada stuffed with shredded beef. I’m not a fan of whatever the sauce was on the side, although I did try it, but the empanada and the beef were delicious.

I did burn the shit out of the top of my mouth when biting into it initially though, so heed the warning, these things are hot when they come out.

Next up is probably my least favorite dish that always seems to get ordered and places like these, queso de cabra al horno… or goat cheese baked in tomato sauce.

I am not a fan of goat cheese, and while I could just dip the bread in the tomato sauce, most people like to mix the cheese and the sauce together immediately so they get the full flavor of the dip on the bread. That means I’m out on this one.

It always seems to get ordered though, so if goat cheese is your jam, then this might be right up your alley.

Now, this is where it got interesting.

I’m a fan of fried calamari. We order it a lot, I have no problem with it, it’s delicious, all good. But I’ve never eaten straight up grilled squid before.

And I know what you’re thinking… it’s basically the same thing as fried calamari when the breading falls off… and you’re right, but that doesn’t make it any less weird and slimy looking on a plate.

But, as I stated before, this was one of those nights where I was going to try everything that was brought to the table… and so I did.

It’s definitely a little more slimy and rubbery tasting than fried calamari, since you don’t get the crunch from the breading, but overall I wasn’t disgusted by it. I did only eat one of them though, so I don’t know if that’s any indication of how it was, but I would definitely try it again if I had to.

The calamares a la plancha is grilled squid with olive oil & garlic…. oh shit, wow, ok, I’m just realizing now that these guys had garlic on them, which I really try to stay away from, but I guess it wasn’t a big deal in the quantity that was in the dish… and also the fact that I only ate one of them.

All in all though, I wasn’t put off entirely by the squid and would definitely be open to trying grilled squid again at other restaurants, if my wife ordered it. I’m not going to go out of my way to order it as my meal, so it didn’t make that big of an impact on me.

After the squid it was time for another one of my safe dishes, the albondigas al jerez, better known as meatballs with sherry tomato sauce… about as safe as it gets.

The meatballs were a little bit spicy, but not too bad, and I will continue to order them the next time we go, as I’m sure there will be a next time.

I don’t really know how else to describe the meatballs… they were just meatballs sitting in a dish of sauce, it was pretty simple.

For our last dish of the evening…

Oh man, ok, so after looking back on what we ordered, and how much of each thing we ordered, yeah, I can definitely see that we didn’t order nearly enough food to satisfy everyone. I guess we’ll just have to go back and be sure to order more next time… oh well.

Anyways, as I was saying, for our last dish we ordered the tortilla espanola, better known as a warm potato & onion omelette….. dammit, it did have onions in it. I really should have kept a menu for myself instead of just having the table keep one menu to order off of. We definitely couldn’t figure out if there were onions in it or not, and two other people even tasted it and said they couldn’t taste onions, so I dug in.

I don’t think I had any ill side-effects, that I can recall anyways, so I think it was all good, but I did eat quite a bit of this, and it was very good. It was basically like a fluffy pancake, but instead of being a pancake it was potato, eggs and apparently onions.

And that was it for the food…

We did order two desserts which consisted of the caramelized banana with vanilla ice cream, quince syrup and toasted pistachios. As well as the natilla flan with natilla custard & saffron caramel.

I did not indulge in either of the desserts, I just sipped on my sangria instead.

Overall it was a great night out with some great friends, but as I now realize, we probably didn’t order enough food. However, we were there for almost four hours, so I think our conversation might have just gotten in the way of our eating. I also think our server might have been getting annoyed with us for staying so long and not continuously ordering more food. He did seem to disappear for like 30 minutes when we were trying to wrap things up.

I’m sure this won’t be the last time we eat at Cafe Ba-Ba-Reeba! and I actually hope the next time is kind of sooner, as I’m a little disappointed in the amount of things we got to try now that I’m sitting down to write this. A tapas restaurant is made for me to get out of my comfort zone and try different foods without the fear of wasting an entire entree, so it would have been perfect to order some weird things just to try…

But like I said, we got caught up in conversation, drinking and just having a great time out with some dear friends, that it almost seemed like the food itself took a backseat to the company. But if you’ve been to Cafe Ba-Ba-Reeba and you have suggestions on some of the dishes I should try the next time we go, please leave a comment, or hit me up on Instagram or Twitter and let me know! There’s gotta be something there that people just absolutely love that we’re missing out on.