We didn’t make it out to any new restaurants this weekend, but only because it was Memorial Day. We did spend a nice Saturday night eating outside at Ten Mile House, but I’ve written about them before, and ordered the same thing we always order and it was delicious, as usual. However, even though we didn’t go to any restaurants this past weekend, we did co-host a BBQ with some incredible food. And we’re not talking about the cheeseburgers and hot dogs, which are always delicious and always pretty boring, I’m talking about the Bulgogi Marinaded BBQ Short Ribs that a friend of ours cooked up for us.

I’ve never smoked crack, but I imagine that it’s a similar feeling to what everyone felt after eating the first bit of these incredible short ribs.

I’ve had short ribs before and never really liked them. They are a bit chewy and fatty, and not really my cup of tea, but the way these were charred perfectly and marinaded overnight… my mouth is watering just thinking about them. And because they were so good, I wanted to share the recipe with everyone here. And even though the instructions are very vague, it’s super hard to mess up this recipe.

The ingredients are pretty straight forward. We found everything we needed at Fresh Farms, which may be local to the Chicagoland area, but I’m sure you can find all of this stuff at any normal grocery store.

As for the short ribs themselves, we ended up with about 6 lbs. of short ribs and cooked about a pound at a time on the grill, but each time a pound was done, it was instantly devoured, by the 14 or so people we had at the BBQ, so just be aware and plan accordingly. And for this much short rib we used a jar and a half of the larger size bottle of the bulgogi marinade, but it may have been too much (we had a lot of excess in the pan).

Take your LARGE CONTAINER, place the SHORT RIBS in the container as flat as you can, pour as much BULGOGI MARINADE as you need in order to cover the short ribs as best as possible.

Cut up the GREEN ONIONS/SCALLIONS and add them to the marinade.

Now, when it comes to the BROWN SUGAR and the SESAME OIL our fearless cook didn’t really have the measurements down to a science. His instructions stated a “couple spoonfuls of each” but it could be up to as much as a 1/4 cup of each depending on how sweet you like it. Obviously the more you add the sweeter it will be, so use your judgement.

We were pretty generous with our measurements and everything turned out just fine, so I think it’s pretty hard to mess this up by putting too much.

Set the container in the fridge and let the short ribs marinade overnight.

Cooking on the Grill

When it comes time to cook these bad boys, make sure to get your grill nice and hot. The idea is to get a decent amount of char on them, but not to burn them. I don’t know if the high heat causes the sugars to caramelize a bit or what, but believe me, you want to get them cooked well done.

Make sure to have a scissors handy so that once the strips are done cooking you can quickly cut each short rib into bit size pieces so that people can just grab one at a time and chow down.

Now that we’re ready to go, throw a bunch of the short rib strips on the grill and let them start to cook up. As I said above, you want to have a bit of a char on them when they are done, so this ain’t no medium-rare steak.

As you’re cooking make sure to BRUSH a bit more of the marinade on each side at least once during the process.

Once they are nice and charred, pull them off and cut them with the scissors and set them out and watch the feeding frenzy.

As soon as each batch of these was done cooking, they were instantly gone. It didn’t matter if it burnt your mouth, nobody cared… they were that delicious. So I hope that anyone else who gives this recipe a try enjoys it as much as we did; it’s definitely going to be on the menu at all of our parties from here on out. 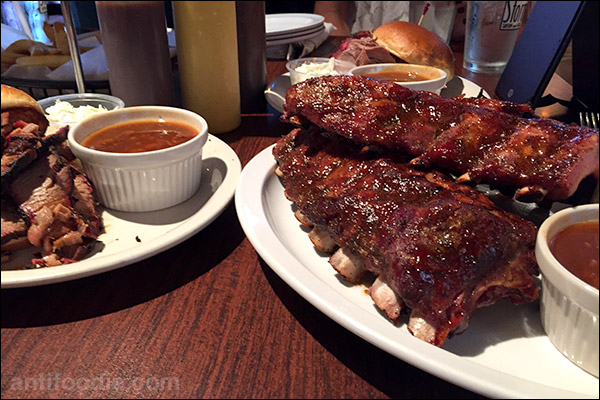