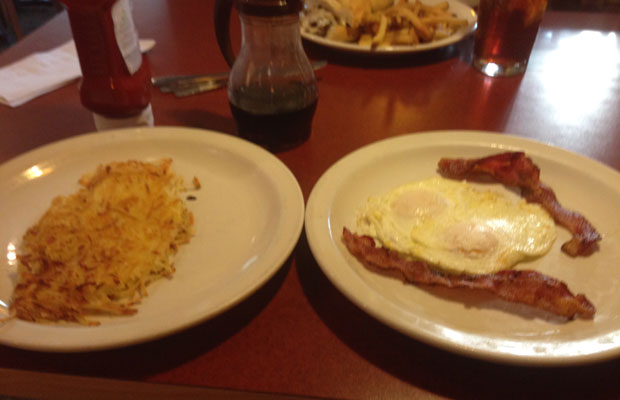 When you have a craving for breakfast at 6PM, sometimes it’s hard to find a suitable restaurant to eat at. Denny’s and IHOP come to mind, but I don’t know of a Denny’s close to our house and I wasn’t sure if IHOP had eggs, as I’ve never had them there (turns out they do). Although, eggs or not, a $5 gift card swayed us away from IHOP and towards Bakers Square to quench our hunger for breakfast for dinner.

I haven’t been to a Bakers Square since my buddy Pat worked there in high school. In fact, his entire family worked at the Bakers Square in Deerfield at some point in their life; we actually renamed the restaurant based on their last name because it was pretty much a pre-requisite that you were part of the family before you could get a job there. Pat even almost got fired a couple times for giving us the senior citizen discount, even though we were 16 years old. They’ve since closed that location and Pat has moved on to bigger and better things, thankfully. But once that location closed I made a promise to myself that I would never go back to another Bakers Square unless a member of Pat’s family was employed there… However, the thought of saving $5 on food made me break that promise, and thus we headed to clown heaven, aka the pie capital of the world… Bakers Square.

There are actually quite a few breakfast items that sound delicious on their menu, but on this particular occasion I knew I wanted eggs, bacon, hash browns and maybe a pancake. The pancake griddle combo seemed to fit everything I wanted, I just had to throw in a side of hash browns and we were set. Celeste had a little trouble finding something she wanted as she wasn’t looking to eat breakfast, but it seemed like everything she did want to eat wouldn’t be available until the following day… Apparently they were adding some new dishes to the menu, but that new menu didn’t go into effect until Monday so they claimed they didn’t have the ingredients. Does that make sense though? I don’t know what time Bakers Square opens in the morning, but if they new menu goes into effect today (Monday), I would assume they would have all the ingredients ready when they open on Monday, but maybe I’m wrong. Eventually she found something to eat and we were all good… until the food came.

I’m kind of picky when it comes to how I like my eggs, scratch that, I’m obviously picky about how I eat everything, but in this case more so the eggs. I always order my eggs over-easy, I like a runny yolk to dip my toast or bacon in, but I like the white of the egg to be fully cooked all the way through. If the egg whites aren’t thoroughly cooked it looks like snot running all over the plate and it’s not appetizing at all. That’s the reason why I get the eggs over-easy, so that I know the top of the egg white gets cooked just as much as the bottom. If I didn’t care about the runny white of the egg I’d just get everything sunnyside up and be done with it. Obviously you can see where this is going as apparently Bakers Square doesn’t like to fully cook their over-easy eggs the way they are supposed to be cooked. I could tell as soon as the plate was put in front of me that they weren’t fully cooked the way I wanted them, but I was hungry so I had no choice.

Most of the egg white was cooked, there were only a few spots where I had to move the snot to the edge of the plate, but I expected more from a place that serves breakfast all day. The bacon was absolutely delicious, so no fault there; as were the hash browns. The pancakes took a bit longer to come out than everything else, and while they kind of just tasted like bisquik pancakes, they provided enough sweetness to satisfy my appetite.

In the future I’ll probably suggest IHOP instead of Bakers Square for breakfast for dinner, but the next time we make it over there it might be to indulge in some pie. I don’t even like most pie, but there’s something about a french silk pie from Bakers Square that just gets me going…

[sorry the picture is blurry, I don’t like taking pictures of my food so I had to make it quick and apparently I didn’t let the iPhone camera finish doing it’s thing] 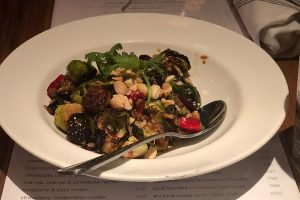 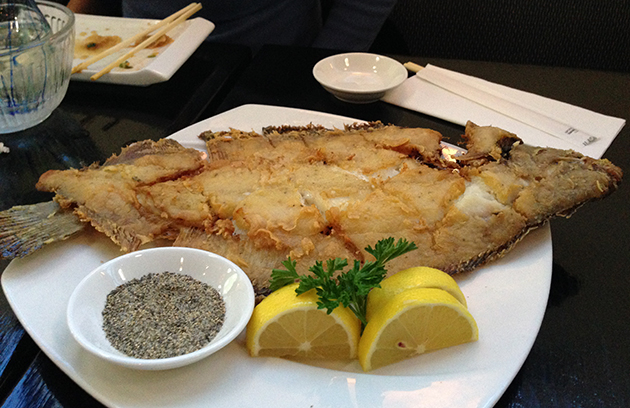